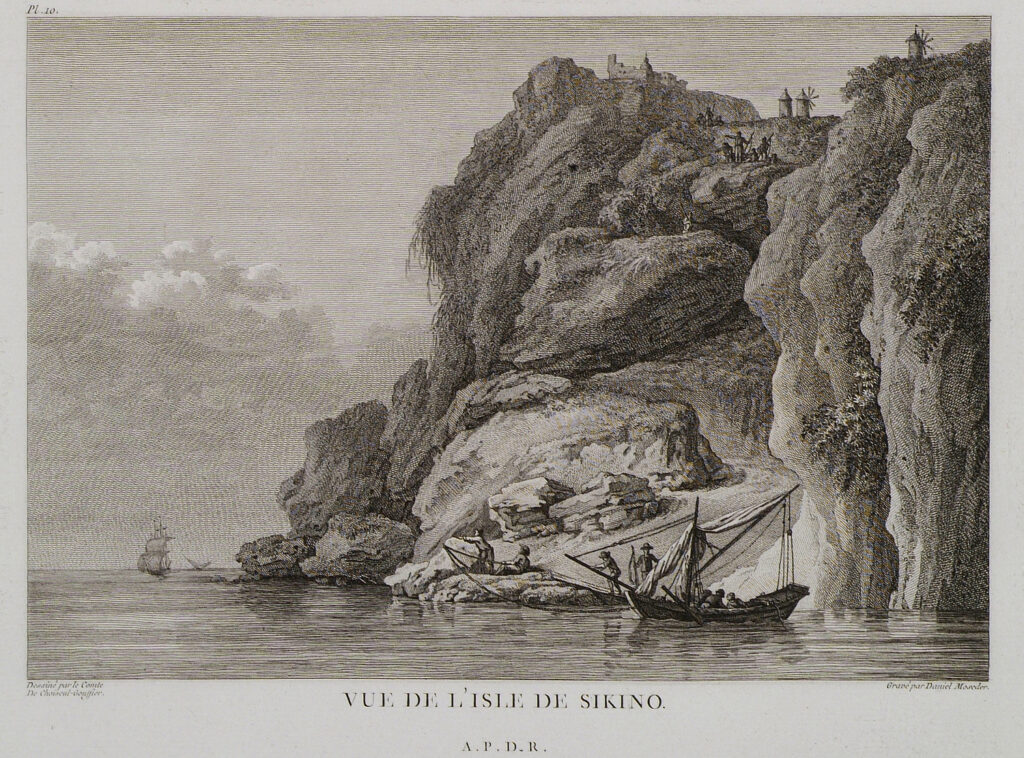 Theodore Bent, the archaeologist and explorer who wrote The Cyclades; or, Life among the Insular Greeks in 1885, published, in that same year, an article whose narrative is set on the Greek island of Sikinos in The Gentleman’s Magazine, a magazine that is said to have contributed greatly to the “construction of British gentlemanly masculinity” from the eighteenth to the nineteenth century (Williamson 2). Its title, “A Romance of a Greek Statue,” immediately raises doubts about its genre and the veracity of the story narrated. The narrator, presumably Bent himself in his capacity as explorer, at the very beginning claims to be recounting, to the best of his ability and memory, a story that a Greek man called Nikola conveyed to him. The descriptions of the setting emphasize the remoteness and insulation of the island and the monotony of life there:

Sikinos is perhaps the most unattainable corner of Europe, being nothing but a barren harbourless rock in the middle of the Aegean sea, possessing as a fleet one caique, which occasionally goes to a neighbouring island where the steamer stops, to see if there are any communications from the outer world, and four rotten fishing boats, which seldom venture more than a hundred yard from the shore. The fifteen hundred inhabitants of this rock lead a monotonous life in two villages. (172)

Amidst ethnographic and social details about the life, the land arrangements, the culture, the customs, and even the popular idioms of the Sikiniotes, we also find the story of a romance which involves Nikola and the woman he loved, Kallirhoe, the priest’s daughter, whom, however, he was not allowed to marry as he did not have enough money “to offer [the father] in return for Kallirhoe’s dower” (176). “‘I was made to eat gruel,’ said he, using the common expression in these parts for a refusal” (176) [Bent here refers to the Greek expression έφαγα χυλόπιτα which is used even today.] Fortunately, one day Nikola, while removing a heap of stones at a vineyard, digs up an ancient Greek marble statue of a woman or goddess, which he proceeds to hide from everyone. He eventually sells the statue to the highest of the foreign bidders who compete for it, thus earning the amount the priest had demanded in return for his daughter. The story with some irony unites the fates of the statue and Kallirhoe, both of whom are sold for money, while the narrator condescendingly implies that the Sikiniote is unaware of his own heritage and the cultural significance of the statue, selling it off without qualms or regrets:

She [the statue] was a great weight to carry all by herself, but at last I got her into the store, and deposited her in her new coffin, wedged her in, and cast a last, almost affectionate look at this marble representation of life, which had been so constantly in my thoughts for months and months, and finally I proceeded to bury her with specimens [of minerals], covering her so well that not a vestige of marble could be seen for three inches below the surface. What a weight the box was! I could not lift it myself, but the deed was done, so I nailed the lid on tightly, and deposited what was over of my specimens in the hole where the statue had been reposing, and then I lay down on the floor to rest, not daring to go out again or leave my treasure. (182)

Boxed and paid for, prey to foreign cultural and even political interests, the statue eventually finds its place at the Hermitage in St. Petersburg: “If ever I go to St. Petersburg, I shall look carefully for Nikola’s statue in the Hermitage collection, which, I understand, was its destination” (184).

Byron’s The Isles of Greece Revisited in 1897