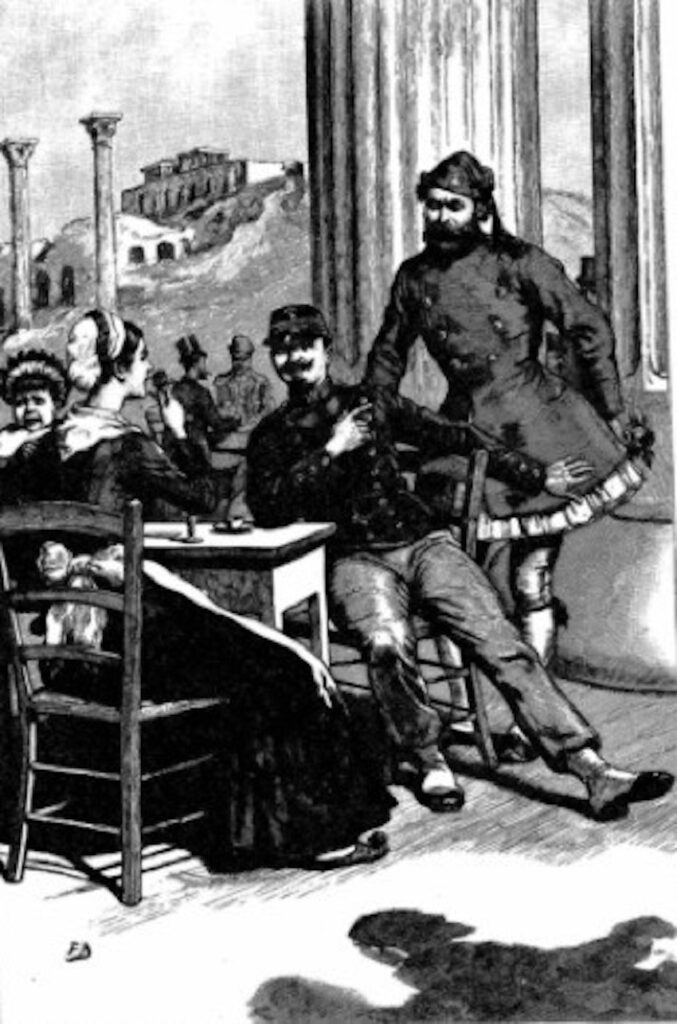 In no other place in the world may one be subjected to such direction as this: “ You are in Euripides Street; go down till you come to Praxiteles Street. At the end of that street take Theseus Street. This leads into Pericles Street. Turn to the right, and the first road on the left will bring you to Hermes Street.” A god, a dramatist, an artist, and a statesman—all of the highest rank, of local reputation, and in one breath!

“Street names of Athens” was a three-paragraph-long text published in the Dundee Evening Telegraph on November 03, 1886. The piece described the progress of the city, its modelling upon Paris and the naming of its streets reminding one of its ancient history:

Athens is not an extensive city yet, but it is growing marvellously. In 1870 its inhabitants were about 45,000 ; in 1880 more than 63,000 ; while it is not excessive to reckon the present population at 80,000. Already, houses are edging far on to the plain towards Piraeus ; the gentle Kephisus is bordered with bricks and mortar; the olive woods are being gradually encroached upon; and, unless some great international combination arrests the progress of Greece, within a measurable time Athens and its port will be one city. But, though striding over the plain under the energetic stimulus of the jerry-builders of the East, and modelled upon Paris as much as possible in its plan, the nomenclature of the streets reminds one of its ancient history.

By the end of the third paragraph, however, all progress is described as having stopped by the root of the Acropolis “and the ineffable litter of cabbage-stalks, offal, oyster-shells, old boots, hats, and worthless rags which nowadays stand for the offering of Athens at the shrine of its most splendid relic!” with the author further commenting that “One holds one’s nose, and gropes hither and thither for a track that would not frighten a goat.”

“Street names of Athens” was part of a piece titled “From Corinth to the Parthenon” originally published in the November issue of The Cornhill Magazine (Vol. 54, 493-511) and written by Charles Edwardes. As the extracts above show, the writer was kinder to the ancient ruins than the people inhabiting the area where the monuments were to be found. In his narrative, Lord Elgin, made accountable for the vanishment of some of the friezework of the Wingless Victory, was a “badly used man” even though his motives were just because “Who could foresee the emancipation of Greece in Elgin’s time?”. Similarly, Edwardes narrates how during his wanderings around the northern and eastern base of the rock of the Acropolis he came upon a mob of native Athenians crammed uncomfortably between three or four backyards shouting “War! War!” while certain maids of Athens clapped their hands from vineclad balconies. He adds that “the dogs and donkeys of the immediate neighbourhood were not backward in their accompaniment” only to link this comment to what came next:

Thucydides’s description of his fellow–countrymen is still so extraordinarily applicable to the natives of Athens that one may be forgiven for quoting it as a commentary on the above scene and recent political events in Greece:

“They are” (he says) “a people quick to conceive, prompt to execute. Their boldness exceeds their power. In the dangers into which they often rush without reflection, they are never forsaken by hope; naturally restless, they seek to aggrandise themselves abroad; when conquerors, they advance and follow up their victory; when conquered, they are not disheartened…They think themselves deprived of a lawful right whenever they fail to obtain the object of their wishes; when frustrated in one measure, they supply its place with a new hope…Strangers themselves to repose, they cannot endure it in others…”

They and their donkeys have something in common, therefore.

The attributes affixed to the Greeks in the above description were exceedingly popular in 1886 at least in the British newspaper and periodical press. In September 1885, Eastern Roumelia had repudiated the authority of the Sultan and had united with Bulgaria causing Greece to demand in January 1886 the restoration of the original boundary fixed by the Berlin Congress. As a warlike atmosphere was building between Turkey and Greece, the South-Eastern corner of Europe was then likened to a “powder magazine” (“The Difficulty Between Turkey and Greece”, The Graphic, 29 May 1886), Greece described as “the spoiled child of the Balkan peninsula” and Greek prime minister Deliyannis as “a maniac let loose in a laboratory of explosives” (“The Greek Crisis”, Globe, 08 May 1886). In January, the London Evening Standard reported that Sir Horace Rumbold, British Ambassador to Greece, had informed Deliyannis that “the British Government was prepared to send a fleet into Greek waters, should the Hellenic Government persist in its refusal to disarm, in order to prevent the possibility of an attack upon Turkey by seas”. The Greek Government declined to give way and this eventually led to the collective blockade by the Powers of the coast of Greece in early May 1886 for one month.

In the period January to May 1886, the popular depiction of nineteenth-century Greece as a spoiled child which, as Michael Herzfeld has noted, was useful to those in power[i], was paired with a depiction of the country as one whose people have a distorted idea of patriotism, based mostly on their uncontrolled martial instincts. In January 1886, even Henry Labouchère’s Truth, which mostly championed Greece as a most interesting new country for investments, obtained that Europe may have to “step in to protect her [Greece] from her own folly” (28 January 1886) should Greece decide to force the issue of accession of territory upon Europe. In April, the Penny Illustrated expressed the hope that  “the Greek Government will retrain the martial instincts of the Greeks, and will keep them from running their heads virtually against a stone wall” (“Great Britain and Greece”, PIP, April 24). In May, the Graphic described the warlike atmosphere in Greece also adding an observation about the modern Greek combining “the patriotism of the heroes of Marathon and Salamis with the acquisitiveness and chicanery of the modern Levantine” (“The Difficulty between Turkey and Greece”, May 29).

As Anastasia Yiangou, George Kazamias and Robert Holland note in The Greeks and the British in the Levant, 1800-1960s (2016),

The relationship between Βritish power in the Mediterranean and Hellenism in its many aspects was always to remain highly ambivalent. On the one hand, the British helped to ensure that the Greek state came into being, and over time used it when convenient as a proxy for their own stake in the region. On the other hand, they consistently reined in the autonomy of Greek statehood to such an extent that the latter was reduced to a quasi-colonial basis. The Royal Navy had liberated Greece, but it also at intervals through the following century threatened to bombard it when independent Greeks seemed to veer away from accepted guidelines.

The May 1886 coastal blockade had marked a peak of interest into Greek affairs for the year and was considered a lesson given to the Greeks as regards their position in the European political arena. As the Athens correspondent of The Timeswrote in a piece titled “The Future of Greece” (Dublin Daily Express, 29 December 1886), “Greece must learn that in the present position of European politics, as in every crisis in the history of modern Hellas, the English Government holds the key to the future of the country, and will hold it as long as it keeps the dominion of the seas”.

In 1886, a walk around the streets of Athens was rife with symbolism both cultural and political.

[i] Herzfeld, Anthropology Through the Looking-Glass, 56, 69. He offers the example of Prince George of Greece referring to the Cretans as “naïve” and “child-like” after being appointed as High Commissioner of the island. Michael Herzfeld notes that what the West saw in nineteenth-century Greece was the passive aboriginality of a childlike figure from an era before the achievement of European maturity whose impertinence was counterbalanced by its childishness, a trait most admirable in a subject from the point of view of those in power.

Featured Image: “A Maid of Athens” by a sketch by F. Villiers. The Graphic. 11 September 1886 [part of the “Athens Illustrated” feature published in two parts on 11 and 18 September].

Leave a Reply Cancel Reply
You might also like
One of the following
A Week in 1870s Athens
A British Hospital in Piraeus, 1897
Love and Pirates in Victorian Ancient Athens