In a previous post, we reported on a Penny Illustrated piece titled “Cretan Amazons” about a “‘brave, wild, ineffectual, almost suicidal struggle for independence” with fiction-like qualities. This was in early January 1869 as the 1866 Cretan Revolt was reaching its end. The text concerned women taking part in the war amongst the mountains while a private letter accompanying a sketch, from which the newspaper’s engraving was taken, declared that its writer had seen “about fifty fair Lakkoite damsels [from the village Lakkoi in western Crete] practising shooting with carbines at a mark”. It was this group of women that the image “Cretan Amazons” depicted. The final paragraph of the text described the dress of these modern “Amazons” and suggested that their “Palikare” uniform could easily become a European trend. The description of the “warrioress” dress ended with the exclamation ” What could be more charming?” (read here the full description). As it happens, however, both the text and image as they appeared in the Penny Illustrated were something of a stage for the traditional Greek female dress and in this week’s post we follow a thread leading us back to the unreferenced source the material used was taken from and conveniently altered.

That the 1869 Penny Illustrated piece reads more like a fashion column than a report about an ongoing war is not unintentional. “Cretan Amazons” took up the upper half of the page while the bottom half was devoted to an illustration depicting “Paris Fashions for January”. “The Ladies’ Column” on the next page explained that the newspaper’s fashions plate for January, a month in which the season for balls was at its height, depicted the most elegant evening costumes worn by the leading ladies of the French Imperial Court (fig.1). 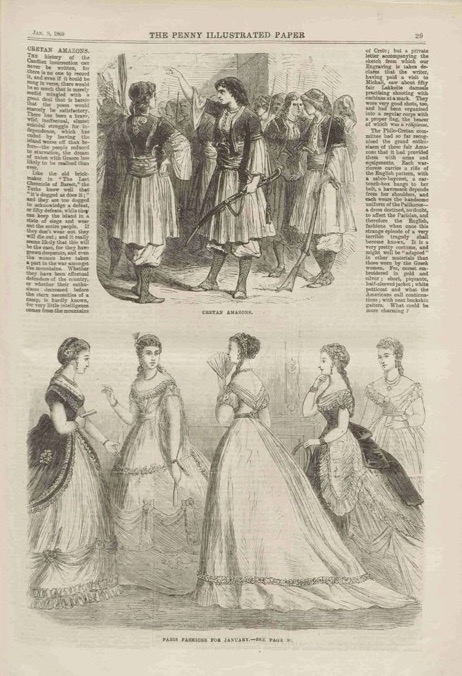 The interesting detail in all of the above is the actual staging of the “Cretan Amazons” in the Penny Illustrated. Even though the newspaper did not provide a reference for it, both the text and the image for “Cretan Amazons” were originally published two years previously, on August 31, 1867, by the Illustrated Times when the text was not only about dress but mostly about the evacuation of Cretan refugees by French, Russian and Italian war vessels (fig. 2).

The Penny Illustrated cut off pieces from both the text and the image (the flag and the surrounding mountains), choosing to focus on the costumes rather than the complete context and ending the text with what the Illustrated Times termed as the “couleur-de-rose view of the affair”. “In reality,” the original piece went on, “the mountains or the valleys of Crete, the heat and cold, the hunger and rain will soon destroy that part of the romance.” Without these additional elements, the piece became mostly about costume and one wonders if the focus of the 1869 text and image on “romance” and the depiction of the “Palikare” dress (which in the last quarter of the nineteenth century would be worn in the Greek cities by the male eupatrids) as a “charming” Greek female dress, in a page visually dedicated to fashion, can be seen as an early sign of the search for gracefulness in dress found in the 1880s in the visual reconstructions of ancient Greece.[i]

The Greek country dress was a link to “that valiant class of hardy peasants”, as Joannes Gennadius would write in 1896 on the recently completed Olympic Games held in Athens, the people who upheld the honor of Hellas (read more on this here).[ii] The daily life and agricultural pursuits of the peasants of the Aegean islands, Theodore Bent wrote in “Greek Peasant Life” (published in The Fortnightly Review and reprinted in Littell’s Living Age in August 1886), bore “the impress of having been directly inherited from antiquity”.[iii] The unsophisticated Greek peasant, as Michael Herzfeld has shown, was considered inferior to modern sophistication and served as the intellectually subordinate representative of European diversity. Despite this, the romantic desire to resuscitate antiquity, to which Greece partly owed its independence, had made national self-images of all kinds meaningful only if they adhered to this “hegemonic standard” which Europe set and controlled. Claiming itself the heir of this ancestry, it was Europe that also decided what a modern Greek culture could look like.[iv]

It is interesting to note too that the page preceding the one with the “Cretan Amazons” in the January 9, 1869 issue of the Penny Illustrated, was dedicated to the principal characteristic dresses of the male and female population in Greece (“Greek Male Types and Costumes” and “Greek Female Types and Costumes”). Even though “Greek Costumes”, as was the title of the text which included details about the illustrations, included a variety of costumes, from the working man’s blue trousers of Turkish origin to the “Grecian ladies” wearing the velvet corsage and the crinoline, it was underlined that “the bulk of the women have remained faithful to the vestments of their ancestors”. The images of the Greek male and female types which corresponded to the text included therefore mainly illustrations of people wearing traditional costumes continuing Victorian culture’s view of Greece, as Churnjeet Mahn notes, as a figure of visual pleasure constantly refracted through petrified antiquity.[v]

Leave a Reply Cancel Reply
You might also like
One of the following
Mary Louisa Whately’s “Greek Slave” in Egypt
REVICTO at the Victorian Popular Fiction Association (VPFA), June 2022
Cretan Amazons: A dress destined to affect the Parisian and English fashions (The Penny Illustrated, Jan. 1869)