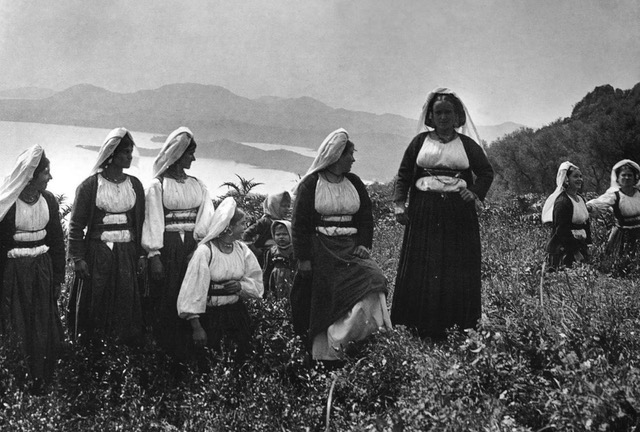 Edith Wharton’s (1862-1937) The Cruise of the Vanadis is the account of the author’s 1888 Mediterranean cruise from Africa to Italy aboard the private yacht, The Vanadis. The manuscript was actually discovered more than a century later, in 1991, when Claudine Lesage was staying at Hyères, France, on the Avenue Edith Wharton, doing research on Joseph Conrad. When the librarian at the Municipal Library there, showed Lesage the leather bound, unsigned pages that were typed in English, she understood the significance of the text she was holding (Lesage 19-24). The account of Wharton’s travel is, as Louis Auchincloss notes in his Foreword to the 2004 edition, “the only writing of hers of which we have any knowledge, except for some juvenilia, from the first quarter of her life” (15). The Cruise of the Vanadis dedicates ten brief chapters on Greece: Corfu and Zante, Milo and Santorin, Amorgos and Astypalia, Rhodes, Tinos and Patmos, Chios and Smyrna, Mitylene, Mount Athos, Athens, and The Ionian Islands. The excerpt presented below offers Wharton’s impressions of two successive days with a description of the local carnival at Corfu, the king’s summer palace “Mon Repos,” and Chalichiopoulou lagoon. Wharton’s persistent registering of the minute which characterizes her later writing is visible in her description of clothing and landscape alike. Costumes are detailed along with the origin and social standing of the people who wear them (“Greeks,” “Albanians,” “Dalmatian women,” “priests,” “bourgeoisie,” “peasants”). Similarly, she pays attention to the flora of the countryside combining it with more general information such as the origin of the name “Ship of Ulysses.” The passage thus offers an intriguing and inclusive view of modern Corfu:

In the afternoon we went ashore again, and found the Esplanade and the arcaded hotels which line one side of it, decorated with arches and bunting in honour of the Greek holy Thursday. There was a kind of mild carnival going on, and the scene was very pretty and amusing.

A little procession of people in masks and dominoes marched up and down, followed by a few carriages, whose occupants were also in carnival guise; but far more interesting was the crowd assembled to watch the antics of this handful of masqueraders. As we walked up and down the Esplanade, we saw Greeks in white cloth jackets handsomely embroidered, fustanellas of white linen, and red leather shoes turning up in a sharp point adorned with large silk rosettes; Albanians in rough frieze coats, with their belts full of pistols and yataghans, Greek priests in flowing black robes, purple sashes, and curious comical black hats. Still more picturesque were the women. The Greek bourgeoisie wore embroidered velvet jackets, and red caps with long golden tassels. The more elaborate Corfiote peasants had on finely plaited skirts of blue cloth and white chemisettes covered with gold and silver necklaces, and held in place by low bodices of velvet embroidered in gold. Their heads were crowned by enormous coils of false hair with red ribbons twisted through them, and over this they wore white muslin veils edged with lace. Still handsomer were the dresses of the Dalmatian women, who wore long coats of blue cloth covered with beautiful gold embroidery, and sometimes clasped by one or even two pairs of the heart-shaped Dalmatian buckles in embossed silver, and sometimes they had aprons of lilac shot-silk, bordered with gold and a second sleeveless coat of rough blue cloth embroidered in red; while their hair, braided over each cheek, was simply covered with a handkerchief of flowered silk.

The next morning the wind fell and the day was beautiful. We went ashore in the steam-launch, bought some photographs, a side-saddle and several other things, and loitered about the town looking into the bric-a-brac shops and the little stalls where peasant jewelry is sold.

After luncheon we had meant to take a long drive, but we discovered that the Corfiotes keep the Greek Good Friday in feasting and country picnics, and every carriage was engaged. At last, however, we found a cab and started for the famous “One-gun battery.” The road leads between blossoming pomegranates, and sweet figs and olives in their bloom; in fact, no better description than Homer’s could be given of the countryside about Corfu.

We stopped on the way at the King’s Summer Palace, formerly that of the Lord High Commissioner, when Corfu was under the protection of England. It stands in the midst of neglected gardens, which must have been beautiful when they were well cared for; and even now the thick growth of purple vincas under the olive-trees, and the clumps of yucca and palmetto in the long grass, make the shady walks picturesque and pleasant. The Palace, called “Mon Repos,”  is an unpretending villa with a terrace from which there is a charming view, over boughs of nespoli and laurustinus, across the blue straits to Albania.

From “Mon Repos” we drove on through endless olive-trees, huge as oaks, under whose shade the soft green turf was thick-sown with anemones and daisies, until at last a turn brought us out on a circular terrace above the sea, the so-called “One-gun battery.” Below us lay an almost land-locked bay, called Lake Calichiopulo, enclosed in olive-clad hills; at its entrance a little island, with a white chapel peeping through cypresses, lies midway in the channel. This is the island called the “Ship of Ulysses,” which all the archeologists and Homeric scholars beg us not to mistake for the said ship, but which has borne the name too long to change it now. (Wharton 88-9)

Wharton, Edith. The Cruise of the Vanadis. New York: Rizzoli, 2004.

Leave a Reply Cancel Reply
You might also like
One of the following
“A Modern Nausicaa” and Tourism in Corfu
Meteora: “The Monasteries in the Air” in the Victorian periodical press, 1880 and 1888
Annie Brassey at Cephalonia (1878)