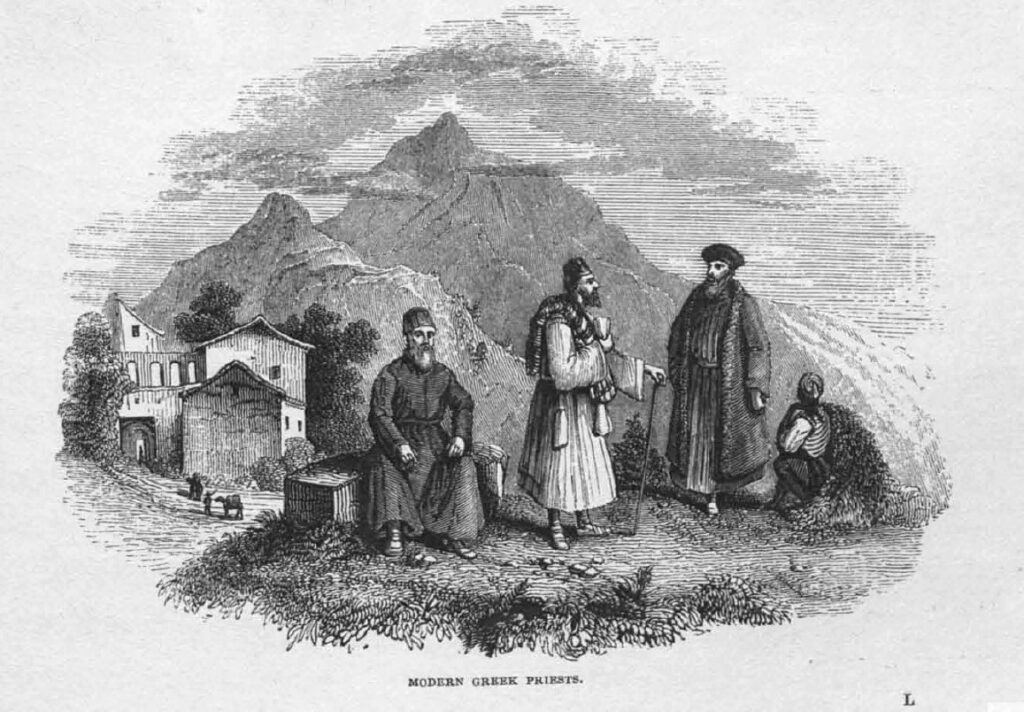 “A western amid the bewildering glories of pagan Greece and the novelties of the oriental ritual.”

Frederick William Faber, a theologian and hymnist, visited Greece in April 1841 as part of a continental tour. He spent almost a month in the country and then proceeded to Constantinople. Sights and Thoughts is the journal of his peregrinations and, to a great extent, an exposition of his ideas on religion and of his personal doubts in matters of faith. Faber was ordained in the Anglican Church in 1839 but decided to convert to the Catholic faith in 1845. The religious element is ever-present in the narrative; Faber sets out – in his own words – as a Middle-Age pilgrim whose mind and eye turn to “the rejected materials of the almost perfect guide-books”, materials “that may suggest meditations a degree higher than those of guide-books, and remind [one], in particular localities, of facts interesting to the eyes of the Churchman” (6-7). In Greece, Faber lands with his mind and eyes conditioned by the classics, his senses on the alert for natural beauty, and his spirit ever-curious for the Greek Church. By training and vocation he’s “a western amid the bewildering glories of pagan Greece [and] the novelties of the oriental ritual” (412).

His journal abounds in references to ancient Greece. But the modern country is also vividly, albeit briefly, portrayed. As examples, two sketches of the inhabitants and their customs:

Spring comes in Greece with a multitudinous retinue of flowers, of aromatic scent as well as bright hue. The swallows, too, of which we had seen none in Lombardy, were here filling the air with blithe twitterings. There was something very beautiful in the old custom of boys catching some of the earliest swallows, and going with them from house to house, as Christmas carollers, or the garlanded kings and queens of May-day among ourselves, demanding presents of food and dainties, boyhood’s earliest and merriest earnings, in return for a sight of the first swallows, a pleasant surety of springtime. From house to house with a swallow in their hands they sang a quaint song, demanding largess with somewhat of a rude, railing sportiveness. (401)

On his way to Marathon, he passes over “the rocky foot of Pentelicus” (410). After a contemplation of the landscape, the immortal plain of Marathon and its famous actors, he visits the Pendeli convent. Here he focuses upon a theme closer to his religious interests and anxieties. The author offers a sketch of a Greek monk:

But a truce to classical remembrances: we are entering the low vine-clad convent which is to be our home for the night, and the priest is descending from the small chapel on the hill, where he has been saying the afternoon prayers, and the little boy who makes the responses is with him. He leads a happy life, yon old priest. From sunrise to sunset, except at prayer times, he smokes a cherry-stick pipe, and is happy. He threatens the cattle with the evil eye, and the people with anathema, and kids are brought him, and he is fed, and paid, and feared, and the cherry-stick pipe never goes out, and he sits under the shade of the convent fig-tree, and he gazes on Marathon always. The green lizard on the wall beside the tank is not happier than the long-bearded convent priest. But what if more be required of the one than of the other? Then it is not so well! (p.411)

The reader – an armchair ‘pilgrim’ – may see, hear, and smell Greece through Faber’s pen:

The stony ground was overgrown with pines, arbutus, lentiscus, and many other evergreen and blossoming shrubs, and the whole soil was carpeted with pale pink and white gumcistus. A most aromatic smell rose from the shrubs, and the ‘odorous undergrowth’ of Attic sage and thyme. Nearly all the way it was as if we were in a conservatory. (410)

Nature’s most fearful and most sweet sounds blend into one harmony, and nothing remains to offend the ear. Throughout the bright night was the air filled with the howling of wolfs and the singing of the nightingales, and the two were pleasant together. The woody mountain side was alive with nightingales, and they sang incessantly and loud. I was at rest in a Greek convent on the south-western verge of the Marathonian plain, kept wakeful by this rough and tender serenade, which overpowered the low voice of the shrunken brook. (412)