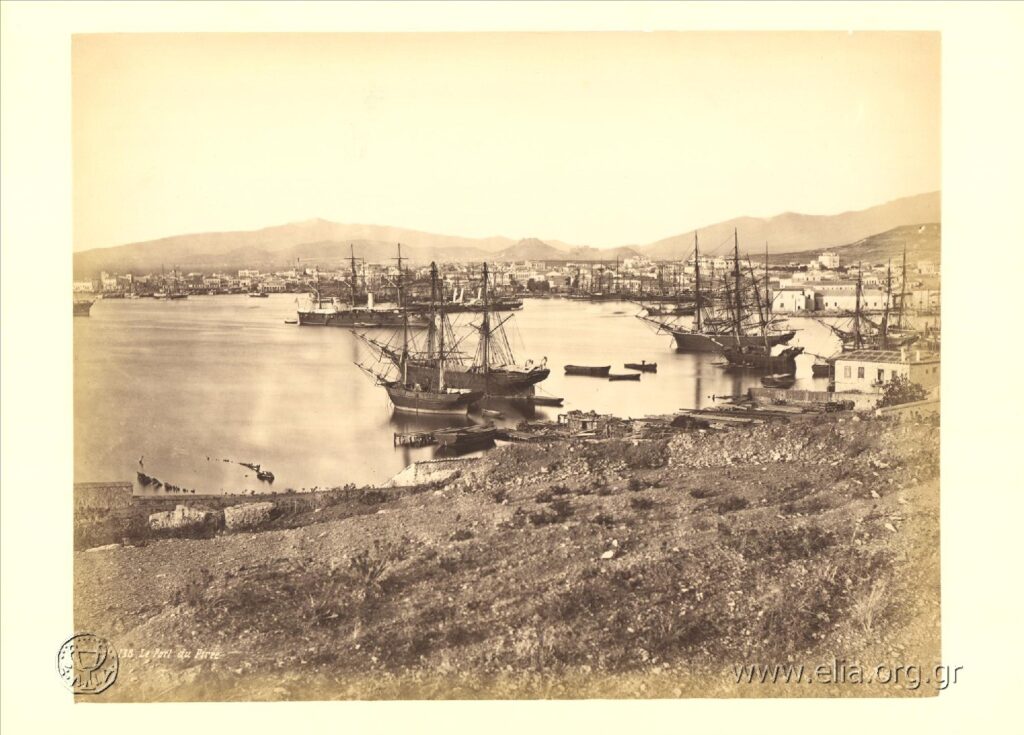 The tideless sea rocks with no rippling swell
The huge ships borne upon its gloomy breast;
No sound disturbs the silence save the bell
Which marks the hour; and answering to the rest,
The sentry’s cry, All’s well! (170)

“All’s well”, the sentry’s cry, is the pivot around which the nineteen-stanza poem turns from associations of the past to visions of the future, shifting from a feeling of discontent to optimism.

“In the Peiræus. A Reverie,” was published anonymously (signed F.) in the February 1864 issue of Fraser’s Magazine for Town and Country. At that moment, the protracted turbulence in the political affairs of Greece seemed to be over and the future was rather promising, if yet uncertain: King Otto, heirless and unpopular with the British for his expansionist agenda and Russian sympathies, was forced to depose (October 1862) and remained exiled in Bamberg; Wilhelm, a seventeen-year-old prince from Denmark, ascended the Greek throne as George I under the auspices of the Great Powers; and Britain’s gift to George for the occasion was the annexation of the Ionian islands to the kingdom of Greece.

George sailed to Greece on board Hellas and reached the port of Piraeus on 18/30 October 1863, escorted by the French ship Algésiras and the British HMS Revenge, in an ironic inversion of Otto’s departure from the port on board the British HMS Scylla (Fokas 208, 221). George set foot on Greek soil in an atmosphere of jubilation, greeted by enthusiastic crowds. The scene starkly contrasted the disembarkation of French and British troops during the Crimean War, in March 1854, for the occupation of Piraeus which lasted three full years. It was a move calculated to stem Otto’s ambitions of territorial expansion towards Thessaly while also revealing the Kingdom’s financial and military frailty as well as its utter dependency upon its Protecting Powers. Inadvertently, the occupation also triggered a devastating cholera outbreak, which author Emmanuel Lycoudes lively captured in his 1893 short story “The Stranger of 1854.” It may be assumed that the word “Piraeus”, already carried these connotations for Fraser’s readers when the poem appeared on its pages.

The scene opens at the port, at night: the poet creates an ambiance of absolute stillness of air and water, the heavy ships rocking soundlessly on the “tideless sea” with their masts “rigid as wrought in iron, shrouds and stays”, the Pleiades lending “their softening glimmer” to the “peaceful scene” (170). Then his (or her) voice guides the reader’s eye to “the rocky shore, where ruined walls / Tell of the glory which has passed away” (170). The stillness of the scene, deplete of any distraction, favours the play of fantasy and the invocation of associations of a remote, glorious past. The Persian Wars quickly file past the eye of the mind, the author highlighting time and again the fierce courage of “heroes, Greeks, [who] for home and altar bled” (171). And then, the poet flies forward to the present, where “fair-haired soldiers from a northern clime / Hailed to the hours, All’s well!” (171).

Taking the cue from the sentinel’s cry, the poet draws an unflattering comparison between the Greeks of the past and of the present, and asks:

And is all well, when in a land like this,
These midnight watches foreign soldiers keep?
When freedom, order, all that sacred is,
From Marathon, where ghostly murmurs creep,
From rugged Salamis

Flies to seek shelter with a foreign power?
Trusts for its safety to a foreign fleet?
When violence, robbery, murder, darkly lower;
When traitors smile, when venal flatteries cheat
The favourite of the hour?

Was it for this each hero dared to sell
His one for hundreds of his foemen’s lives?
That now his children should not shame to tell
They trust as surety for their homes and wives
The English hail, All’s well! (171)

The poet carefully constructs this antithesis between a heroic classical past and a degraded Greek present only to turn the reader’s attention to the future of the British Empire. At the time, the Victorians were already discussing the cultural connection between classical Greece and contemporary Britain, therefore in the poem the mental leap from one to the other seems easy if not natural; the British empire imbibes the heroic and moral virtues of the classical past while turning a bright eye to the future:

Yet all is well where England’s banner waves,
Where stalwart hearts and hands uphold the right;
That flag no smiles, no help from strangers craves,
But boasts its glory and its unscathed might,
E’en whilst it danger braves (172)

Modern Greece fades completely out of the picture, it only served as a useful vehicle of contrast to  the bold expanding empire, whose fate the poet prophesies with words of comfort and optimism:

And still, whatever course our fate may hold,
Leading us on o’er yet more distant seas,
Our flag shall boast its glories as of old (172)

The poem closes with the sentinel’s cry, which this time sounds truly reassuring:

And whilst each hour the ringing echoes tell
The lapse of time throughout the sleepless night,
Still shall they call up thoughts that love to dwell
Nobly amid the past, or future bright,
With trust that All is Well. (172)

By 1864, the editor of Fraser’s Magazine for Town and Country was the novelist and historian James Anthony Froude, a disciple of Thomas Carlyle. The Fraser’s of the 1830s, created by William Maginn and James Fraser and which “was plainly marked by the dash and riotous mirth of the Regency” (Wellesley Index 445), had turned Victorian in character (445) and its politics had shifted “from liberal to conservative” (448). The poem, then, could be viewed within the context of a magazine that, as early as 1849, has begun to favour a “Liberalism, which looks to the future and all the higher interests of our national life and society” (John Tulloch, quoted in Wellesley Index 438).

Leave a Reply Cancel Reply
You might also like
One of the following
A British Hospital in Piraeus, 1897
Sketches of Modern Greece in 1837 & 1838
George Gissing and the smoking mill-chimneys at Piraeus [1889, 1895]