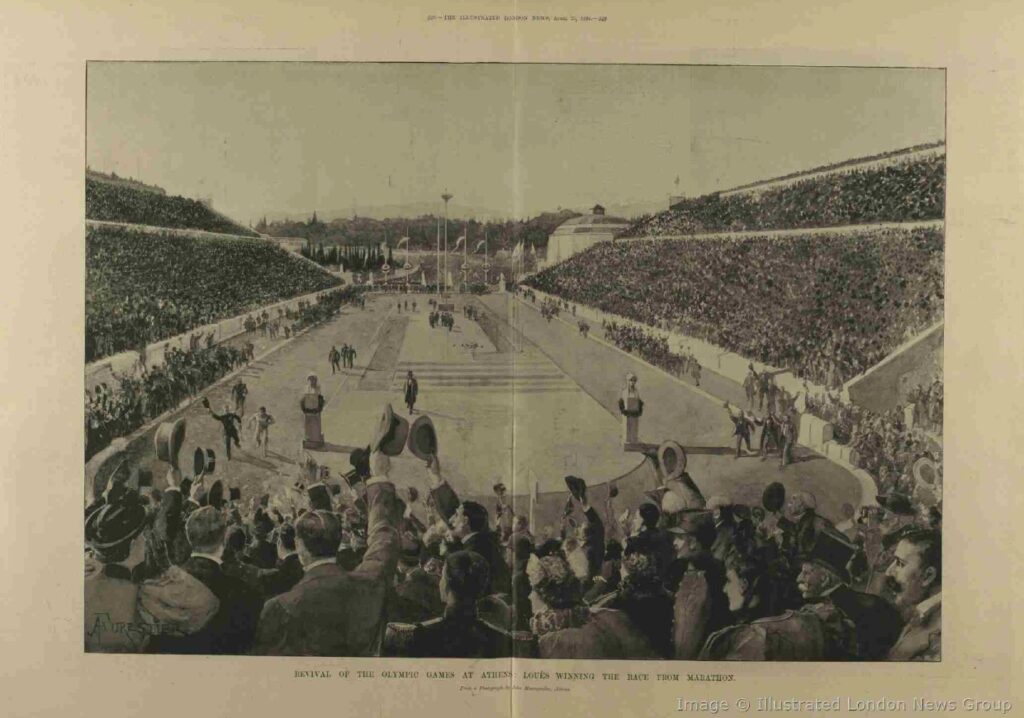 In April 1896, the Illustrated London News published a text by Joannes Gennadius on the recently completed Olympic Games held in Athens praising Greece for scoring a triumph. The text focused on the figure of Marathon winner Spyridon Loues and on how he had repeated the feat of Thersippos 2386 years later. An illustration of the restored Olympic Stadium on p. 16 of the newspaper pictured Louis ‘winning the race from Marathon’ (see our Featured Image).

Read a short extract below:

In spite of recent reverses and disappointments, Greece has scored a genuine triumph – unexpected, but fairly won. The first quadrennial meeting of the International Olympian Association, held in the violet-crowned city, the capital of the classic home of athleticism, has earned for the Greeks golden opinions, both for their welcome, their hearty hospitality, and the sportsmanlike acclamation accorded to foreign competitors and victors, as well as for their own creditable achievements in the contests. This is all the more remarkable as up to a couple of years ago there was a hardly a trace of inclination for athletic exercises among those who would lay claim to the heritage of the most unrivalled record of athletic feats the world has ever known. […]

In than valiant class of hardy peasants, from which Greece has at all times recruited her best soldiers, she found again the man who now brought her victorious to the fore. Six months ago Sotirios, having served his time in the ranks, returned to his plough. He was known to be a good runner; and without fuss of bustle he entered himself as a competitor. On the morning of the race, when he left his cottage at Amarousi, his father said to him, “Sotiri, you must only return a victor.” And at the start, from the tumulius which enshrines the immortal dead of Marathon, an old rustic cheered his countrymen with the greeting usual with the Greeks at Eastertide – “Brothers, Christ is risen! ’tis time we, too, resuscitate; prove yourselves to be true Hellenes.” For even the peasants, patriotic and intelligent to a fault, knew of the importance attached to the event, and were stirred to their very moulds to uplhold the honour of Hellas. […]

There is hope for Greece with such a peasantry – the healthiest class in the land.

Both text and image found at the British Newspapers Archive.