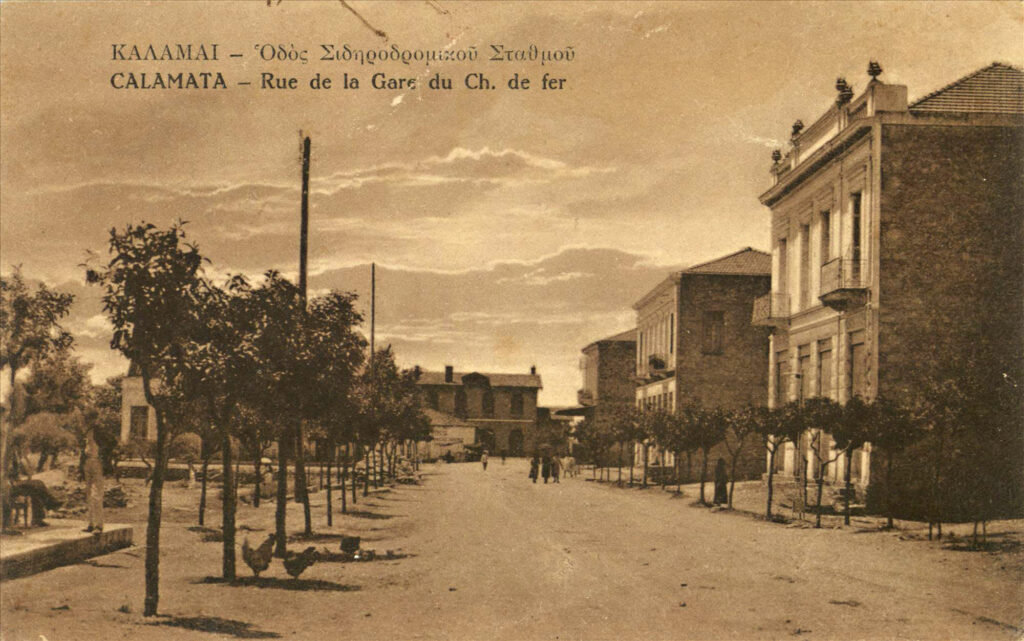 Kalamata is one of the pleasantest towns of the Peloponnesos. Situated in the rich Messenian plain, among orange groves which recall the golden fruit of the Hesperides, and banana plantations which are a proof of its splendid climate, it is protected by the mountains from the cold winds, and may perhaps one day become the Nice of the Near East. Nature has done much for Kalamata.

The town is a busy and flourishing place of about 18,000 inhabitants, which has long since recovered from the ravages of Ibrahim Pasha during the War of Independence, and is now the second largest town in the peninsula. Since the Railway has been completed, Kalamata is in direct communication with Athens by both island and sea—for the port of New Kalamai is only a mile away. It is now possible to leave Athens early in the morning and arrive at Kalamata—or Kalamai (“the canes”), as it is officially called—the same evening about nine, so that the Athens papers are on sale in the streets here on the day of their publication. There is nothing classical about the prosperous town, but patriotic Greeks will ever associate the river Nedon, which passes but cannot be said to flow, beside it, with the first Te Deum which the insurgents offered up for victory in the War of Independence. The bazaar offers as Oriental a spectacle as you may see in all Greece. Here, as in Sparta, and, indeed, in all provincial towns, the stranger is a boundless source of interest to the natives, and his entrance into a shop is at once the signal for a crowd to assemble, in order to see what he is going to buy, how much he is going to pay, and to hear him speak Greek—a performance which the Greeks take as a very great compliment, and upon which they never fail to comment favourably. The one historical sight of the town is the Frankish castle, which rises picturesquely on an eminence fifteen minutes behind it, for the tower inside the town is quite modern. A stirring history is connected with the castle, which was to the Frank princes of Achaia what Mistrâ was to the Byzantine Despots. For Kalamata was assigned to Geoffroi de Villehardouin, who assisted Guillaume de Champlitte to conquer the Morea, as his family fief, in place of the Venetian settlement of Methone; and it was within these walls, still fairly perfect, that the knightly Guillaume de Villehardouin, the founder and loser of Mistrâ, was born—the first of his race to see the light in Greece. Here too he died—the last male scion of his noble house—to the great loss of the principality, which in the weak hands of women henceforth became the prey of rival claimants till its extinction. Bur Kalamata’s castle has Venetian memories, too, and I noticed the Republic’s sign-manual, a winged lion, upon it. For, when Morosini recovered the Morea for his country towards the end of the seventeenth century, he occupied the old stronghold of the Villehardouins, thinking thereby to overawe the untamed Mainats. The Turks spared the castle; let us hope that the Greeks will preserve so interesting and picturesque a memorial of the Frankish period.

Leave a Reply Cancel Reply
You might also like
One of the following
‘The only interesting geography is geography of three dimensions’: Williams George Clark in Peloponnesus and from Athos to Salonica (1858, 1863)
The third Zappeian Olympiad in Macmillan’s Magazine in 1875
Sketches of Modern Greece in 1837 & 1838