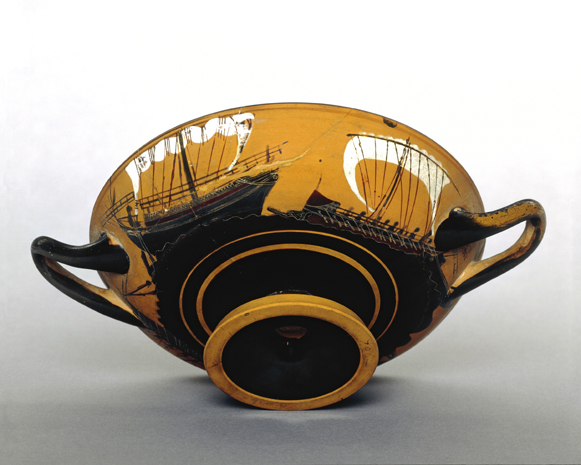 Throughout the nineteenth century popular narratives in periodicals adapted ancient Greek myths and history or created new enjoyable stories which allegorically reflected on Victorian socio-political concerns. In such stories involving invented characters and situations, ancient Greece is used merely as a setting.

In “An Old Greek Scene and Adventure”, published in Dublin University Magazine in 1863, the anonymous author invents two lovers, Iolaus and Leriope, students of Plato, who during a romantic walk are captured by Egyptian pirates who demand ransom for their release. The couple’s philosophical debate about the nature of love is juxtaposed to the “barbaric songs” and “unknown language” of the pirates who indulge in “wild” drinking pleasures. Fortunately for the lovers, the pirates are quickly destroyed by an Athenian vessel, and peace and civilization are restored as the young couple marries in the midst of gaiety, wine, and music. Developing a sensational plot, the story emphasises the richness of ancient Greek culture at risk by unpredictable “barbaric” forces, and perhaps alludes to the continued threat faced by Greece throughout the nineteenth century during debates about the Eastern Question and Greece’s position between the West and the East.

The description of lively and cosmopolitan ancient Athens is worth quoting at length:

Never did a brighter summer evening illume the noble mountains and streams, the towns and sea of Attica, than that whose declining splendours shone upon the festival of the Graces, which was held at Athens on the 15th of the month Scirrophorion (May). The noise and bustle which during the noonday had filled the city had subsided—the voices of the youths practising in the stadiums, circuses, and gymnasiums—the mercantile and nautical clamour which had reigned from early morning around the two ports, Phalereus and Piraeus, had given place to the pleasant hum of voices, and the sound of musical instruments in the airy streets and shadowy temples. The great highway leading from the sea to the Acropolis was thronged with laughter-loving white-garbed crowds of citizens, intermingled with groups of foreigners from many countries—Egyptians in long linen robes, Thracians in scarlet tunics and fur caps, motley gatherings of Asiatics from various regions of the east, shawled and bearded Medians, which conical head-dresses; gaily attired Lydians, tall Cappadocians, still retaining the costume of their original Scythian plains, the skin dresses ornamented with gold; silk and wool merchants from Smyrna and Iberia, traders in gold dust from Colchis, and others whose barks had come laden with corn from Sicily, laserpitium from Cyrene, ivory from Mauritania, frankincense from Arabia, and slaves from many districts.