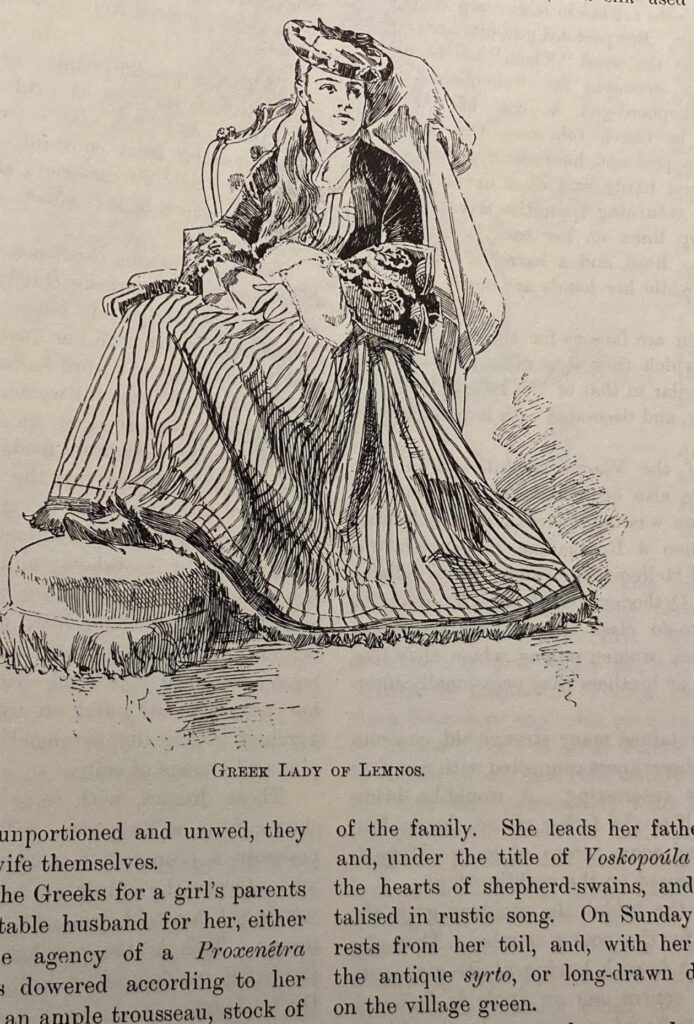 Lucy Mary Jane Garnett (1849–1934) was a folklorist, ethnographer, and traveller, who travelled extensively in the Balkans and Middle East, recording the customs of the people she visited and publishing several volumes on Greek and Turkish folklore, such as Greek Folk-Songs from the Turkish Provinces of Greece (1885, edited by John Stuart-Glennie), Greek Folk Poesy (1896), The Women of Turkey and their Folk-Lore (1890), Mysticism and Magic in Turkey(1912), Greek Wonder Tales (1913), Turkey of the Ottomans (1914), Greece of the Hellenes (1914), and Balkan Home Life (1917). Garnett, who knew Greek and Turkish, emphasized the life and culture of women in the Balkans, which she believed had been neglected by male travel writers in previous accounts of the region.

Garnett’s ethnographic description of Greek women also appeared as an essay in The Woman’s World in 1889. Garnett was a controversial figure in Woman’s World because of her role in the anti-suffrage movement (her name had appeared in the anti-suffrage petition) and her polemical reply to Laura McLaren’s feminist essay “The Fallacy of the Superiority of Man” –published in the magazine’s first volume– with her own “The Fallacy of the Equality of Woman” (I, 529-531), provoking a controversy that the magazine’s editor, Oscar Wilde, seemed to desire.

The section on the Greek women of the Ottoman Empire in Garnett’s article raises the issues of continuity between past and present, especially in relation to “race,” viewing “the classical Greek type” in the contemporary Greek women of regions like the Asia Minor. She also brings up the Greek dress, which was popular at the time among the magazine’s readers, to stress the continuity between Ancient and Modern Greek women:

It is well, en passant, to remind admirers of the Greek dress that the greatest perfection of lines and profiles is indispensable for wearing with advantage the clinging draperies of this quaint and most graceful attire. … The Greek women far excel those of other races, not only in personal refinement, but in general intelligence and desire for self-improvement. The classical Greek type is very noticeable in some localities; in others it has suffered from admixture with foreign elements; but we find it again in perfection among the inhabitants of the seaboard of Asia Minor, though the Greeks were there once so crushed and denationalised as to have replaced their mother-tongue by that of the conquering Turk. Smyrna, Gemlek, and Philidar on the coast, and Demirdesh and other places in the interior, possess some magnificent specimens of the Greek race. The Greek women of the upper class are generally clever, well-bred, well-informed, and might rival in accomplishments, culture, and conversational powers, their sisters of the West. And the Greek ladies of “The Phanar ” at Constantinople have for centuries been renowned for their ability and acquirements. The advantages of education are, however, by no means restricted to the upper class, for not only in the towns, but in almost every village where there is a Greek community, schools have been founded in which the instruction given to girls ranges from the simplest elementary lessons to ancient Greek psychology, and mathematics. (168)

The praise of Greek women’s looks is conditioned by Garnett’s racial comments and their accomplishments limited by class. Garnett also points out the defects of the women’s “national character,” claiming that “the most striking faults in the Greek woman’s character are her vanity, fondness for dress and display, and jealousy of the better circumstances of her neighbours.” Consistent with her conservative and anti-feminist politics, is her approval of the Greek women’s domesticity:

They are, however, very domesticated, make devoted wives, and fond, if not always judicious, mothers. Family affection is, perhaps, the noblest trait in the Greek character. Nowhere else, I think, does one see fraternal love so strongly developed, nor the women of a family so tenderly cared for. (169)

Featured Image: a page from The Woman’s World

Leave a Reply Cancel Reply
You might also like
One of the following
Lucy Mary Jane Garnett and Greek Women – Part II
“Vasilissa” in The New Monthly Magazine, 1867
A Romance of a Greek Statue (1885)