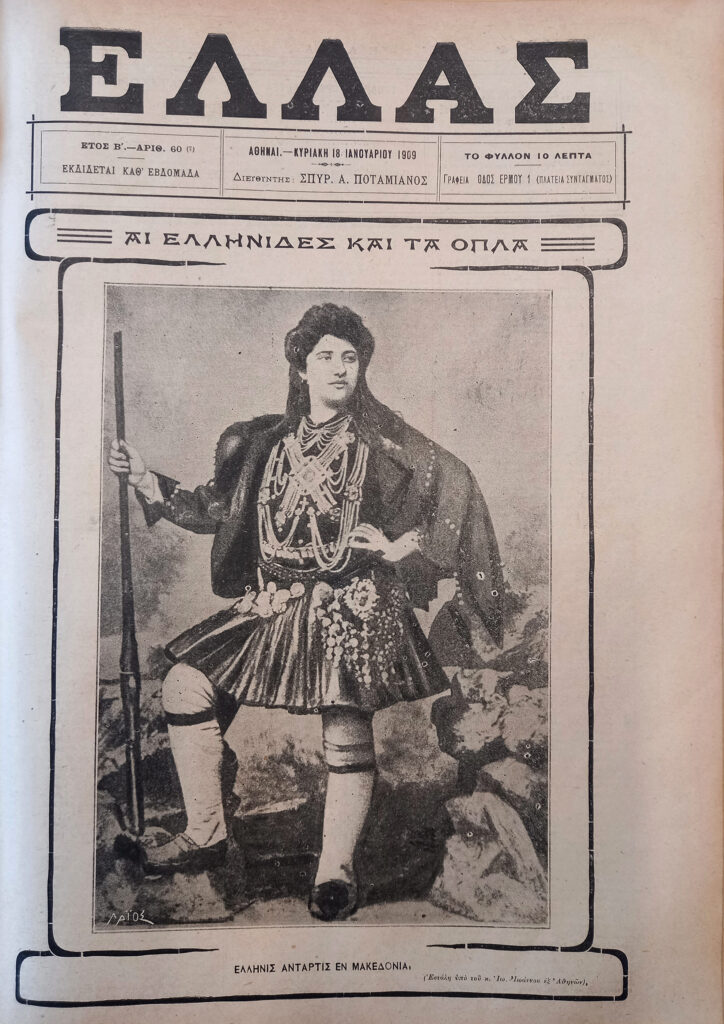 In 1899, ten years after her essay in The Women’s World on the Christian women of the East, Lucy M.J. Garnett published an article entitled “Greek Matrons and Maids” in Good Words, a religious monthly periodical founded in 1860 by the Scottish publisher Alexander Strahan. This popular magazine, mainly targeting the lower middle classes, combined religious with non-fiction articles on general subjects, suitable for Sunday reading. In her essay on Greek women, Garnett repeats some of the observations listed in her earlier article , “The Christian Women of Turkey” in Woman’s World, focusing, however, on the different ‘types’ of Greek women, from those confined to their domestic and life to the few exceptional women who fought in battles donning a male attire, like the anonymous heroine of Missolonghi wishing “to be buried in the pallikar’s dress which she had worn during the war and had ever since treasured in secret,” and Peristera who turns into Vangelli, “the beardless” to fight in the Macedonian rebellion of 1878 (462- 463). Garnett’s account of the secluded life of women in Greek society uses Greek women to support her conservative politics (see Despotopoulou and Mitsi 2021), arguing that the inferior social position of Greek women is not due to “the influence of Moslem manners on the conquered races” (462) but to the continuity with antiquity, as since Homeric times women rarely left their home. In Garnett’s article, the cross-dressing woman warrior, which appeared in Victorian fiction of the period, such as Elizabeth Mayhew Edmonds’s Amygdala and Isabel Fyvie Mayo’s A Daughter of the Klephts, or a Girl of Modern Greece, albeit still present in Greece, becomes domesticated:

A far more sensational story, however, is that of a woman named Peristera, “The Pigeon,” who was an actual combatant in the rebellion [of 1878 in Northern Ottoman-held Greece], during which her brother met his death. On the cessation of hostilities this woman joined a band of brigands, and became their leader under the name of Venghelli, to which her followers added the sobriquet of Spano, “The Beardless.” After pursuing the calling of Klepht for some two years without her sex being discovered, she gave in her submission to authorities, was pardoned, and became a domestic servant in the household of the Bishop of Kodjani. A photograph taken at the time represents her in full Klepht costume –sword, pistols and yatagan at waist, gun in hand, and suspended round her neck the insignia of chieftainship… (463)

Coda: Garnett seems to twist contemporary accounts of the deeds of Peristera Kraka (1860–1938), also known by her nom-de-guerre Kapetan Spanovangelis (Vangeli the beardless), by turning her into a domestic servant. In fact, Peristera a woman from Siatista, Macedonia (then under Ottoman control), became commander of her brother’s rebel forces after he was killed by the Turks during the 1878 Macedonian rebellion, which demanded the abolition of the Treaty of San Stefano and the unification of Macedonia with Greece. After the revision of the Treaty, Peristera returned to Siatista and when her amnesty was violated, she moved to Thessaly in Greece and married one of her comrades. A statue of Peristera, praising her as a “defiant and lion-hearted Amazon” was erected at Siatista in 1990, her hometown in which she later settled and died.

Featured Image: A 1909 cover of Ellas magazine with a picture of Peristera Kraka. Courtesy of ELIA-MIET.

Leave a Reply Cancel Reply
You might also like
One of the following
Lucy Mary Jane Garnett and Greek Women – Part I
“Vasilissa” in The New Monthly Magazine, 1867
A Romance of a Greek Statue (1885)