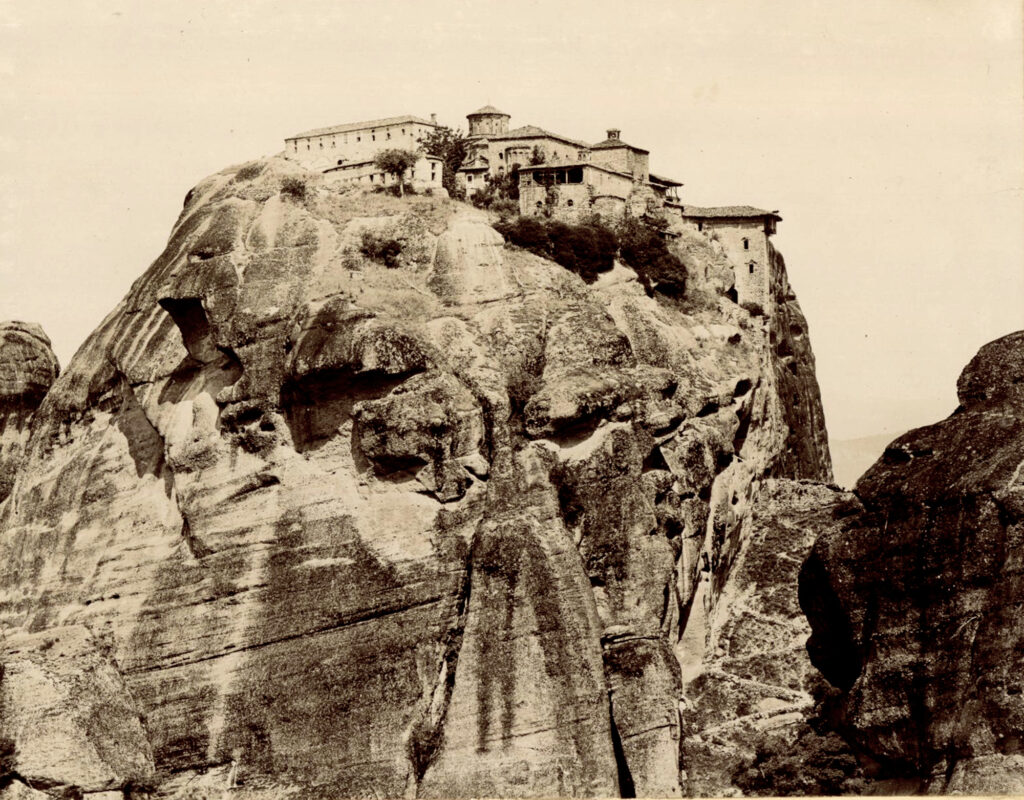 Meteora: “The Monasteries in the Air” in the Victorian periodical press, 1880 and 1888

Meteora, as a location of singular natural beauty as well as of particular interest to the students of Byzantine art, was included in Murray’s Handbook for Travellers in Greece from its first edition in 1840 and in all successive editions. An excerpt from the Handbook’s 1854 edition appeared in the Illustrated London News (8 August 1880) in an article entitled “The New Frontiers”. Following the Treaty of Berlin (1878), lengthy negotiations took place between the Great European Powers and the Ottoman Empire for the settlement of the Eastern crisis. One of the outcomes of the negotiations was the re-drafting of the Greco-Turkish borders and the surrender of the Ottoman-ruled region of Thessaly to Greece.

While this was not formally sanctioned till May 1881, it seems that the issue had engaged the interest of the Victorian readership. The anonymous author of the ILN article informs us that previous numbers of the magazine provided ‘sketches’ of various Ottoman-ruled cities or areas of Thessaly and Epirus, such as Jannina and Mount Olympus, while a recent (unspecified) publication offered a map of Thessaly bearing the “new frontier decreed by the Conference of the Great Powers at Berlin”. In the issue of ILN in question, the anonymous contributor made only a brief reference to the political side of the issue and chose rather to tease the imagination of the adventurous traveller: he (or she) focused on the “aerial convents” of Meteora and particularly on one of their sensational features as described in Murray’s Handbook: their accessibility through the unconventional means of rickety perpendicular ladders or a net drawn by a pulley (see figure 3).

Eight years later, Theodore Bent penned the article “The Monasteries in the Air” which appeared in The Gentleman’s Magazine (May 1888). Bent was an English amateur archaeologist and anthropologist who, along with his wife Mabel, travelled extensively in the islands of the Aegean archipelago during the 1880s. His accounts of their travels were published in various journals and magazines, ranging from scientific to popular. In this case, their footsteps led them to the Greek mainland and, particularly, the monastic community of Meteora which, as Bent notes, was uniquely placed on top of a “perfect forest of quaint, pinnacle-shaped rocks” (475). Bent’s account of their visit and exploration of the monasteries balances between a travel memoir and a short story. On the one hand, it addresses the reader interested in archaeology or medieval architecture – although descriptions are occasionally peppered with humour and irony that give it a more informal tone:

Of all I saw in this vast wandering pile of buildings the kitchen pleased me most; it is perched on the extreme edge of the cliff, so that the cook has no difficulty with the disposal of his rubbish. It is about twenty feet square with a steep stone roof open at the top, and supported by four columns. These columns stand on a platform, where the fire is lighted for cooking things on a large scale […] round this central hearth is a stone dresser for the preparation of the viands […] it is an interesting specimen of medieval culinary architecture […]. The refectory of the Meteora is correspondingly magnificent […] at one end stands a round table at which the Superior of the superior monastery of the Meteora sits in solitary grandeur and consumes his food” (484).

On the other hand, the narrative employs Gothic elements in order to create sensation and conjure breath-taking images:

The snow turned into rain, and we arose next morning to find ourselves in a mist so dense that we could not see a yard before us, a miserable mist which never lifted for one instant for several days, and which kept us prisoners within the walls of St. Stephen, with nought to do save wander amongst the passages of our strange home, and chat with the monks in their common room and their cells (478).

As we approached the monastery of Varlaam it suddenly appeared before us upon its peak amidst a perfect wilderness of rocky needles around which the mist swirled in tenacious rings as the wind arose which was to free us from our enemy (482).

Prisoners to the elements notwithstanding, the Bents stand for the intrepid Western traveller, indefatigable and ever-ready to explore and expand one’s horizons, geographical or otherwise – in stark contrast to the monastic brethren which Bent classifies as narrow-minded, ignorant and superstitious:

Finally, after two days of enforced imprisonment, and when it appeared as if the mist would never rise, we put on our mackintoshes and obliged the holy Sophronios, much against his will, to conduct us to the neighbouring monastery of the Holy Trinity, a matter of no small difficulty in the thick impenetrable atmosphere (481).

Here at Varlaam the superior is rather deaf, very ignorant, and almost bedridden […] It would seem almost past belief, but, nevertheless, it is a fact, that the superior of Varlaam put the following embarrassing question to me, “Where is England”? (483)

Such is the gossip in vogue in a monastic common room, and after listening to the story of a robber, whom the late superior had excommunicated, and who, after death, had turned into a vampire, I thought it time to go to bed (487).

Bent, with his mixture of information, satire, and sensational images offers to the readership of The Gentleman’s Magazine an entertaining picture of the monastic community of Meteora. Tinged as it may be with accusations of backwardness and ignorance (a trope common in various travel accounts, previous and contemporary to the article), it also expresses regret at the fast approaching modernization:

The present prime minister of Greece, Mr. Tricoupis […] will soon have destroyed all but the larger [monastic lands], and rumour says that he has his eye on the Thessalian eyries for convict prisons. And it is more than probable that before the close of this century this radical change will have been effected (475).

This church was an interesting and fitting conclusion to our experiences amongst the rocks, a sort of sacred oasis in a wild desert, which will, I fear, soon lose those associations which bind it to the past, and as we traversed the great Thessalian plain, we cast many glances back on the peaks and pinnacles which had afforded us so much interest during our stay amongst them (488). 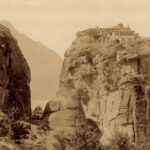 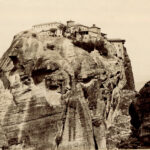 Handbook for Travellers in Greece: Describing the Ionian Islands, the Kingdom of Greece, the Islands of the Ægean Sea, with Albania, Thessaly, and Macedonia. London: John Murray, 1854.

Leave a Reply Cancel Reply
You might also like
One of the following
A Week in 1870s Athens
“The Recent Earthquakes in Greece: Survivors Camping out at Atalante” (ILN, 2 June 1894)
Byron’s The Isles of Greece Revisited in 1897

Cretan Amazons: A dress destined to affect the Parisian and English fashions (The Penny Illustrated, Jan. 1869)