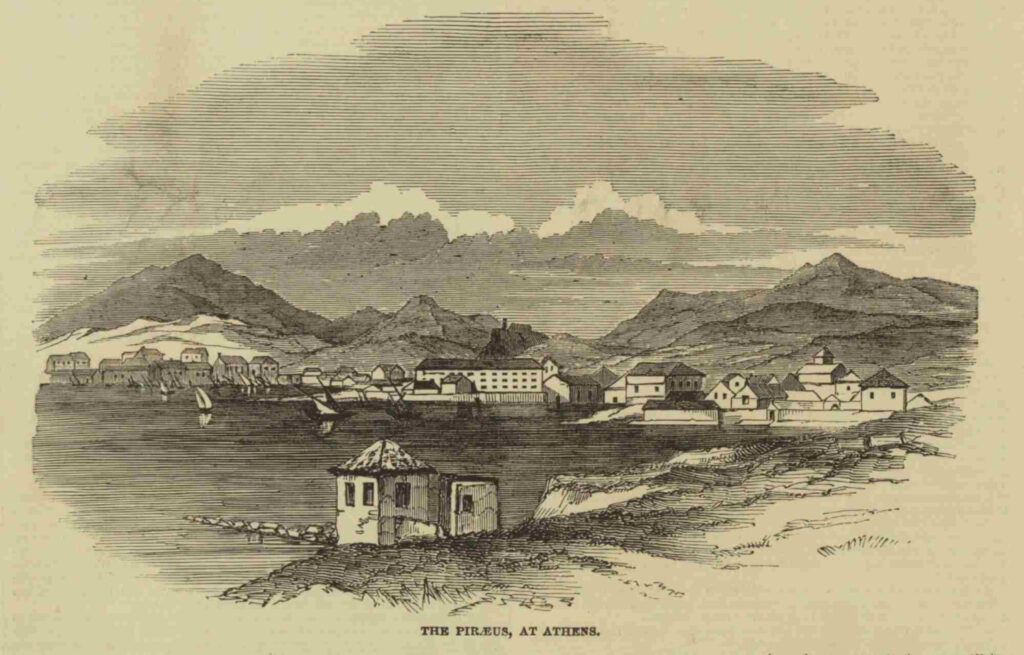 You have heard the ancient story,

How the gallant sons of Greece,

Long ago, with Jason ventured

For the fated Golden Fleece;

How they traversed distant regions,

How they trod on hostile shores;

How they vexed the hoary Ocean

with the smiting of their oars; –

Listen, then, and you shall hear another wondrous tale,

Of a second Argo steering before a prosperous gale!

The poem “The Modern Argonauts” appeared in Blackwood’s Edinburgh Magazine, in the issue of May 1850. Since January of that year the long-standing and seething diplomatic antagonisms between Britain and Greece had evolved into a full-blown crisis. This took the shape of a naval blockade of the Grecian coasts by the British fleet. The reason proffered by Britain was a number of cases of injustice towards British subjects residing in Greece (David Pacifico, George Finlay, a number of travellers attacked by brigands, as well as a few inhabitants of the Ionian islands) and the denial of the Greek government to offer any kind of compensation to the victims. The Illustrated London News suggested that “the principal bone of contention between the great British wolf and the little Grecian lamb is as to the sovereignty of the two small islands of Cervo and Sapienza” which the British government claimed to belong to the Ionian islands. The Greek government believed otherwise.

Lord Palmerston, as Foreign Secretary, ordered the British fleet – the “second Argo” of the poem – to blockade the Grecian coasts until the Greeks would see reason and comply with the British desiderata. Admiral Sir William Parker proceeded to blockade the major merchant ports of Greece, such as Piraeus, Syros, and Galaxidi. Vessels belonging to the Greek government were detained and by March more than a thousand merchant vessels had been seized and confiscated. This was the culmination of the “Don Pacifico Affair”, named after a Jewish British national born on Gibraltar and resident of Athens, who claimed a compensation for the destruction of private property. Palmerston’s handling of the affair created a political controversy in Britain in both Houses of Parliament and occupied the public opinion well into the summer of that year.

The poem, which is composed of 12 stanzas and spreads over two and a half pages of the magazine, draws the details of the affair from the newspapers and paints a caricature of Palmerston’s choice of action. One should bear in mind that the poem is published in a conservative magazine and that it criticizes the actions of a Whig government. Palmerston is represented as “a proud dictator” who sits:

In the midst of his Divan

In his high Olympian hall,

Unregarded by the mighty,

but detested by the small;

The unknown author adopts a marked anti-Semitic rhetoric and the stereotypes usually related to Jews, possibly in an effort to exaggerate the notion of ridicule that Palmerston’s course of action conferred upon the fame and diplomatic stature of the country. Namely, that mighty Britannia set out on a purely mercenary affair, utterly devoid of honour: the defense of “the carpets of a black and bearded Jew” which the sons of Agamemnon, obviously against their better judgment, proceeded to confiscate:

Helen’s rape, compared to this, was but an idle toy,

Deeper guilt was that of Athens than the crime of haughty Troy.

As for the “fleeced” victim, thus speaks Palmerston of the poem:

For his sake I hurl defiance

At the haughty towns of Greece.

The poet laments how the “Angel of the North”, who, with her guns at Navarino “proclaimed that Greece again was free” now appeared on the shores of Greece for a fleecing expedition whose outcome:

Hath not been as yet reported

In the columns of the Times.

But the last accounts assure us of some valuable spoil:

In the poem, Palmerston’s depiction of the Greeks as “yelping, fangless curs” who cannot fight reproduces some of the arguments that appeared at the time in the British press regarding the lamentable state of Greece, materially and morally. “To be as perfidious as a Greek has become a common term of reproach in Europe” asserts the Illustrated London News, although it condemns Britain’s handling of the affair as that of a “blustering bully”.

It is significant that the poem was published in the pages immediately following an article by George Finlay entitled “Greece Again” which commences thus: “Greece is a most unfortunate country. She has only escaped the Turks to be plundered by her rulers and ruined by her protectors”. Finlay sketches the actual state of Greece, as he perceives it, in terms of administration, justice, taxation, and society. He highlights the corruption that pervades Greek politics and asserts that “there is not moral force in the country to produce the necessary reforms”. Therefore, rather than acting the part of the castigator, Britain should step in and behave as a Protecting Power; convene with France and Russia, draft and implement the much-needed reforms. The article and the poem stand in dialogue with each other. By the time the reader of Blackwood’s reached the poem maybe they had already picked up some facts from Finlay’s account of the “most unfortunate country”. On the other hand, maybe the poem would help alleviate the oppressive image of Greek and British politics that Finlay had painted.

It is an instance of multiple cross-pollination: between politics and the press, between different continents, and between imagination and reality.

Ancient chiefs! that sailed with Jason,

O’er the wild and stormy waves –

Let not sounds of later triumphs

Stir you in your quiet graves!

Other Argonauts have ventured

To your old Hellenic shore,

But they will not live in story,

O! ’tis more than shame and sorrow thus to jest upon a theme

That, for Britain’s fame and glory, all would wish to be a dream!

Leave a Reply Cancel Reply
You might also like
One of the following
Sketches of Modern Greece in 1837 & 1838
Voyage from Leghorn to Cephalonia with Lord Byron, and A Narrative of a Visit, in 1823, to the Seat of War in Greece.

William Makepeace Thackeray and the Palace in Athens