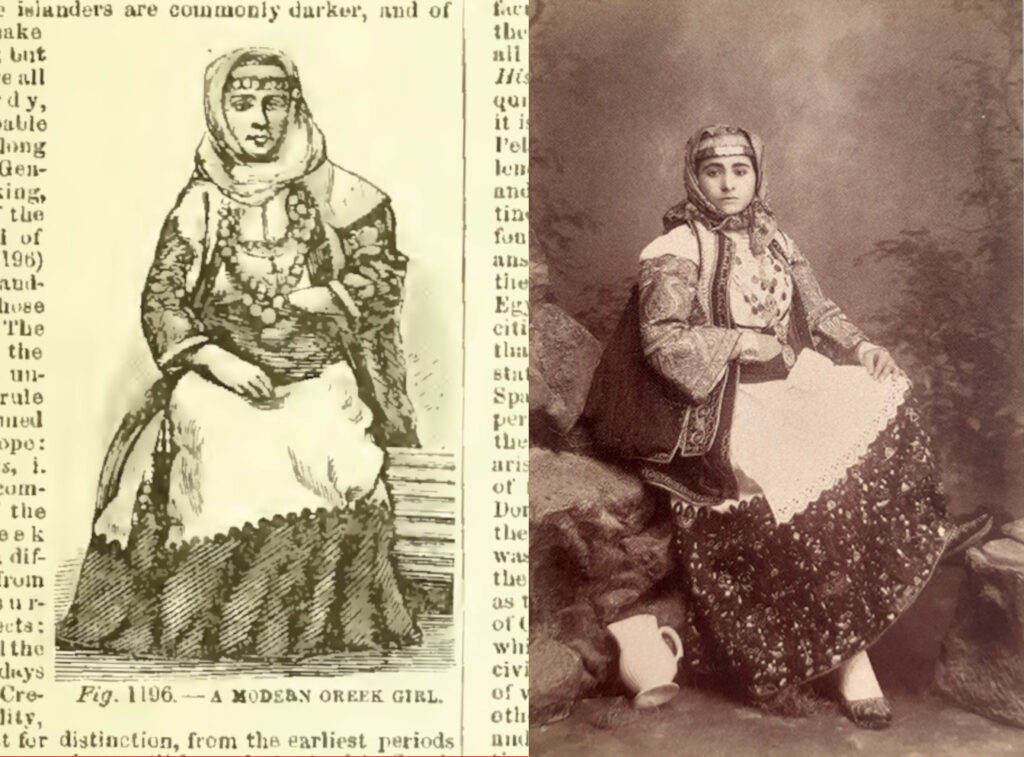 Zell’s Popular Encyclopedia, a two-volume work of 2500 pages in quarto size, was published in Philadelphia (USA) in 1871 and again in 1887 in a slightly revised form. The subtitle of the 1871 edition describes the work as A Universal Dictionary of English Language, Science, Literature, and Art. Its scope may sound somewhat broad if not ambitious given the publication’s rather confined format. Its editor, Leo De Colange, strove for readable and succinct entries that are occasionally illustrated by engravings or sketches. Statistics and facts on all areas of interest ranging from geography to ethnography are widely applied, especially for the illumination of entries on continents and countries, which are treated as bodies to be mapped out, measured, labeled, and categorized.

The entry for Greece makes no exception and it begins thus: “Greece: a modern kingdom of Europe and the most celebrated state of all antiquity” (1054).Except for occasional brief references to ancient Greece the entry, which spreads over two closely-printed pages, describes the condition of the modern kingdom in terms of natural resources and economy, always with an eye to the potential of growth and material progress. Flax, wine, oil, silk, figs, and currants are noted as the land’s main produce while a variety of minerals and rocks – silver, copper, gold, limestone and marble – and the prospect of their exploitation are also underlined. Finally, there are a few remarks on the infrastructure (or lack of) underpinning commerce as well as an overview of the state’s mainly agrarian economy:

G. has no navigable rivers, nor would any be worth notice, were it not for the classical recollections which attach to every portion of this celebrated country. […] The want of navigable rivers in Greece is obviated by the numerous gulfs and inlets of the sea, which indent its coasts on every side, and afford unusual facilities to commerce, while they add to the variety and beauty of the scenery. (1054).

The agricultural implements are still as rude as in the days of the Peloponnesian war, or even of Hesiod; and this, added to the scarcity of ploughing-oxen, ruggedness of the country and, general thinness of soil, and difficulty of tillage and irrigation, is enough to damp the ardor of even a more energetic population. The houses of the country people are in most parts little better than mere hovels. (1054).

The main sources informing the entry on the issues of the manners, customs, physiognomy, and character of the Greeks are Friedrich Thiersch’s On the Current State of Greece and the Means to achieve its Restoration(1833) and Thomas Hope’s popular novel Anastasius (1820). From Thiersch’s book the editor has chosen to reproduce an extended description of the inhabitants of Greece: the islanders, the peoples of Morea and of central Greece. From Anastasius the entry cites Hope’s estimation of the Greek character and its versatility, especially under adverse conditions.

The choice of the sources is of some interest in the sense that both texts might have been rather outdated at the moment of the Encyclopedia’s publication and one of them is actually fiction. At the same time, the section also includes an illustration (a sketch) that seems to be based on a photograph. The sketch is embedded in a passage offering a detailed physical description of the Greeks who, like other “exotic” peoples represented in the Encyclopedia(e.g. the Egyptians, the Afghans), are meticulously described:

The modern Greeks are generally rather above the middle height, and well shaped; they have the face oval, features regular and expressive, eyes large, dark, and animated, eyebrows arched, hair long and dark, and complexion olive-colored. The islanders are commonly darker, and of a stronger make than the rest; but the Greeks are all active, hardy, brave, and capable of enduring long privations. Generally speaking, the women of the islands and of Hellas (Fig. 1196) are much handsomer than those of the Morea. (1055).

Figure 1196 is the sketch of a “modern Greek girl”, a woman donning the costume of Attica. It closely resembles a late 1860’s photograph (above) taken by the Greek photographer Petros Moraites. In his Athenian studio, Moraites created photographic series of Greek “types” which were popular among travellers to Greece. Whatever the original source of the sketch might be, it seems that the image of the “modern Greek girl” was pretty up-to-date and accurate – at least as far as the peasant populations of Greece were concerned – and that it possibly sprang from a very modern medium, photography.

A special entry is devoted to Greek language and literature, mainly the ancient. As for contemporary Greek literature, a brief mention runs thus:

Since the establishment of the Greek kingdom, literature has made great progress in Greece, chiefly in the department of education, in which the publications have been innumerable. Works of distinguished merit have signalized the names of Tricoupi, the Rangabes, Soutsos, Asopios – the History of Greek Literatureby the latter, challenging a fair comparison with similar works in other countries. (1058)

Zell’s Popular Encyclopedia. A Complete Dictionary of the English Language and a Gazetteer of the World. Philadelphia: T. Elwood Zell, 1887.

‘The only interesting geography is geography of three dimensions’: Williams George Clark in Peloponnesus and from Athos to Salonica (1858, 1863)