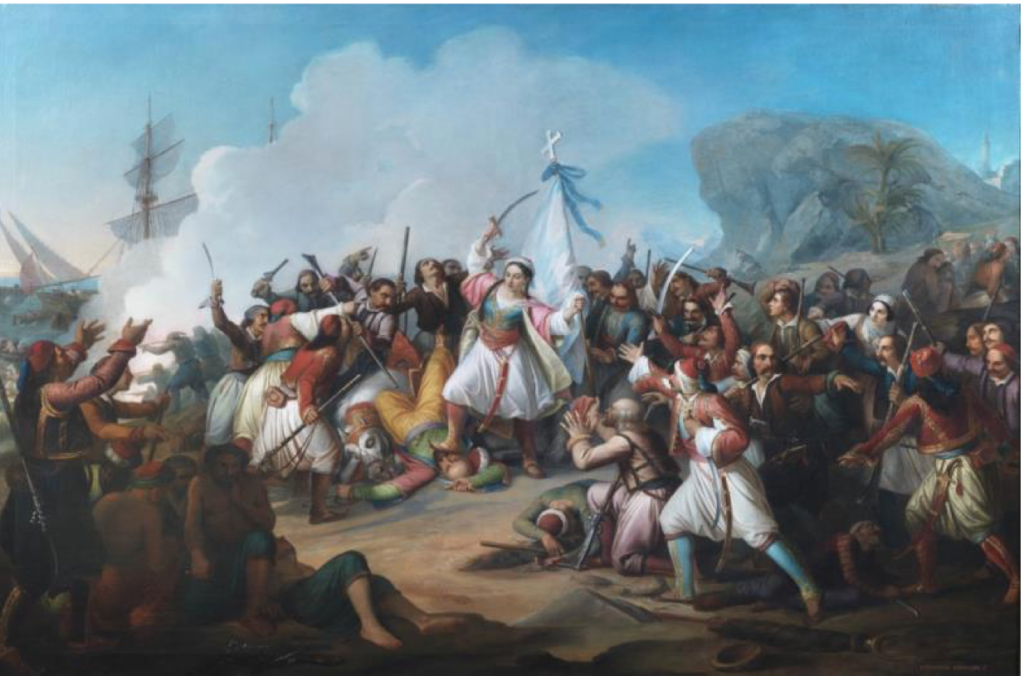 REVICTO in “Through the Pen of Others: Nineteenth-Century Views of Revolutionary Greece” (Dec. 2021)

We are very pleased to announce that four REVICTO team members will be presenting papers at the International Conference “Through the Pen of Others: Nineteenth-Century Views of Revolutionary Greece” organised by the School of Philosophy of the National and Kapodistrian University of Athens on 8-11 December 2021.

Professors Anna Despotopoulou and Efterpi Mitsi will be presenting on ‘The Re-emergence of Revolutionary Greece in Late Victorian Popular Culture’, Konstantina Georganta on ‘Crete in the pages of Punch, 1866-1898′ and Mathilde Pyrli on ‘“Greece! glorious Greece! What art thou but a name?” From Revolution to Kingdom through the pages of the New Monthly Magazine, 1821-1833.’

Please find the abstracts below.

The Re-emergence of Revolutionary Greece in Late Victorian Popular Culture

In the late nineteenth century, from the 1860s to 1890s, stories about revolutionary Greece re-emerge in Victorian popular literature, in novels, short fiction and travelogues which appear in popular periodicals and other publications. Short stories such as the anonymous ‘Vasilissa’ published in New Monthly Magazine revisit the Greek War of independence and return to the popular allegory of Greece as an enslaved woman to reflect on the ‘Eastern question’ and the British colonial politics in the Eastern Mediterranean. At the same time, women authors like Elizabeth Mayhew Edmonds, Isabella Mayo and Lucy Garnett, publishing in women’s magazines, write stories about the role of women in the Greek War of Independence, relating the feats of these fictional or historical figures to the ‘woman question’ and to Victorian debates on femininity as well as on gender, national and imperial politics. In the late Victorians’ re-imagining of revolutionary history, modern Greece is not enslaved to its classical past as in traditional philhellenist representations but must discover its modernity through its powerful nationalist agents. In women’s popular fiction, Greek heroines, portrayed in accordance with Victorian social, political, and aesthetic concerns, resist the narrative that promoted British male intervention in Greek affairs. Yet, the stories also enact the commodification of Greek women, for despite the defiance that the heroines exemplify, they express the British fascination and disillusionment with Greece, being like the nation herself both idealized and objectified, protected and sacrificed depending on British policy.

Crete, lying as a ‘tempting prize in the fair way of nations’, fought for union with Greece no fewer than seven times in the duration of the nineteenth century. In 1898, it was declared an autonomous principality under Great Power protection, a prelude to the island’s final annexation to Greece in 1913. In the pages of Punch, a satirical magazine of the imperial capital founded in 1841 and tagged as the ‘mirror of the popular mind’, we find plenty of references to Crete since the island was an area of contention in that period that attracted attention to Greece as part of the diplomatic discussions held around the Eastern question. Exploring the references to Crete in this popular Victorian magazine is allowing for a storyline to surface narrating British interest in modern Greece throughout the Victorian period whilst unearthing various narrative strands used when referring to Greece. So it is that we move from Punch being critical of the 1850 blockade of Piraeus using the ‘intellectual civilisation’ argument, to a 1875 piece in which Punch admits that Greece, like all other insurgent provinces previously under Ottoman rule, would be ideally imagined by England as a colony by the year 1879, on to a March 1897 illustration of ‘Dame Europe’ delivering ‘little Crete’ to a ‘nice, kind Turkish policeman’ and finally on to a scene from a ‘Grand International Nautical Melodrama’ revived in 1898: ‘SAVED!…“Avast there! you lubberly Swab! Take the gold, and let the Gy-url go free!!”’

“Greece! glorious Greece! What art thou but a name?” From Revolution to Kingdom through the pages of the New Monthly Magazine, 1821-1833.[1]

The Greek War of Independence was widely reported in the British Press, both in the daily political newspapers as well as in journals. This paper will focus on a monthly popular literary periodical, the New Monthly Magazine and Literary Journal, and examine the ways in which the Greek cause, from the first outburst of the insurrection to the arrival of King Otho at Nafplio as sovereign of independent Greece, was re-presented in the journal’s sections and texts of various genres. The period under examination coincides with a fundamental transformation of the journal’s character from annual register to a major literary periodical. In 1821 the well-known Scottish poet Thomas Campbell undertook the editorship – a position he held for a decade – and declared the journal’s “main object to be literary and not political”. It addressed the literary-minded reader and, perhaps, it was due to this literary orientation that the New Monthly Magazine assumed a voice imbued with the ideals of Romanticism; a voice that spoke against despotism and tyranny and seemed to embrace all revolutionary movements from Venezuela and Spain to “glorious” Greece. This stance was mainly expressed through the medium of poetry and the impassioned poems by prominent literary figures such as Felicia Hemans, Letitia Elizabeth Landon, and Agnes Strickland but it was also reflected throughout its contents, down to the carefully-worded monthly news reports from all over the world. This paper will trace the representations of the Greek Revolution in poetry, memoirs and essays, book reviews, and news reports. It will discuss them bearing in mind the journal’s particular character (literary and popular) as well as the shifting political fate of the Greek cause.

[1] Browning, Elizabeth Barrett. “Stanzas, Excited by Some Reflections on the Present State of Greece.” New Monthly Magazine, vol.1, May 1821, p.523.

Review of The Greek Revolution by Edward Blaquiere (London, 1824)