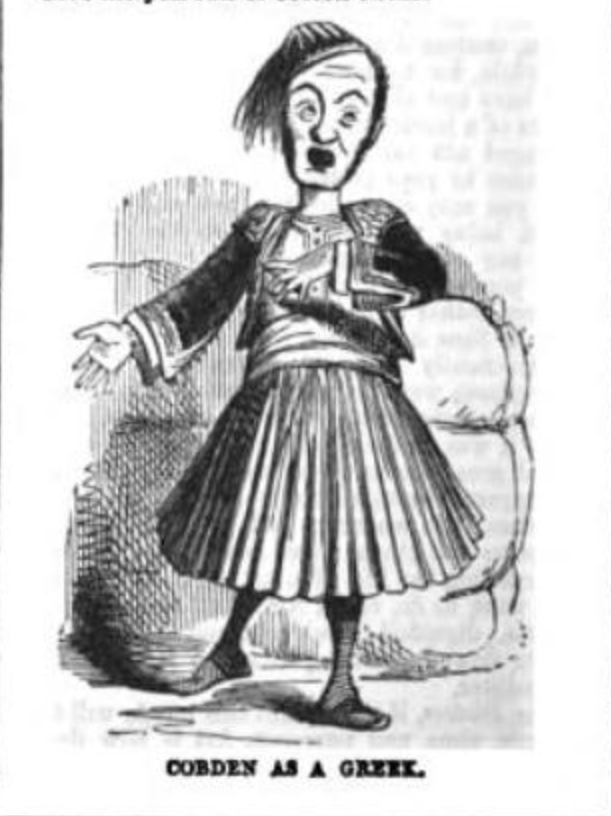 Richard Cobden, the British politician known for his defense of free trade as the main tenet of foreign policy, published in 1836 the volume Russia and the Eastern Question in which he had tried to dispel the notion that a war with Russia in defense of Turkey would safeguard British trade interests in the Black Sea.

In the volume, he also maintained that the Ottomans had a “benumbing” effect on the regions under their rule which had resulted to the latter not producing a single “poetic genius or man of learning to the world” despite having previously produced Solon, Homer, Longinus and Plato.

This could have been why in 1854, in the midst of the Crimean War, Cobden featured in the satirical Punch magazine in a mocking lyric titled “The Land of Greece” which included the line “Why take to force, when you have fraud?”. The text was accompanied with an illustration of him depicted as Greek in traditional costume (see this post’s featured image).

It is significant to note here that the depiction of Greece as a land of fraud was a popular one in the pages of the magazine.[i] In 1859, for example, a short article titled “Modern Olympians” found the idea of the organization of Olympic Games in Modern Greece a ridiculous enterprise (the Olympics were then sponsored by Greek businessman Evangelos Zappas). It was the parody of a classical institution carried to extreme point, the article argued, mainly because of the modifications that needed to be introduced to some of the main features of the old Olympic Games[ii]:

“The Presidents were above suspicion of being bribed.”

“No unfair dealings were allowed.”

“No criminals, or such as were connected with guilty persons, could present themselves.”

“The only reward was a piece of olive, something with no money value.”

“The only object of the Games was to stimulate courage and virtue.”

How can so ridiculous a notion be entertained as that of having anything of this sort in Modern Greece. Pooh! The report must be a French canard.

Projecting a negative image of the country’s state functioned as an argument in favour of the necessity for immediate action to practically save the country from itself. This in turn meant saving “her” from Russian influence and counteracting British fears of Russian domination of the Balkan peninsula. To this goal, the relation between Russia and Greece was often ridiculed in the pages of Punch as far back as 1854 when we find several entries on the subject.

[i] In 1870, after several accounts of brigands kidnapping foreign travellers for ransom, Punch suggested that a a new era had dawned in Greece: ‘it is not the Golden Age nor the Silver Age nor the Iron Age but Brigand Age.’ See “A New Era.” Punch Vol. 59, July 9, 1870, 18. See also Jenkins, The Dilessi Murders, 1961 for the story of how in 1870, four travellers in Dilessi Greece, three British and one Italian, were kidnapped by a gang of bandits and held for ransom. The negotiations were botched and eventually the four were murdered. The episode severely tested the relations of the young Greek state with Britain.

Leave a Reply Cancel Reply
You might also like
One of the following
Meteora: “The Monasteries in the Air” in the Victorian periodical press, 1880 and 1888
Punch’s Handbooks to the Crystal Palace the Greek Court through Mr Owen Jones (1854)