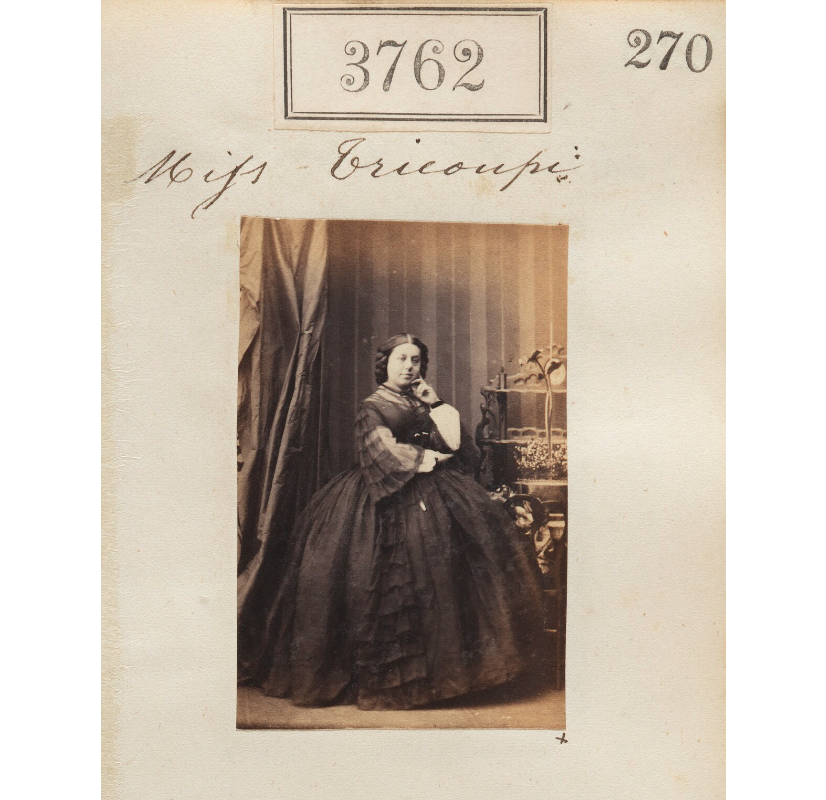 Daughter of Spyridon Tricoupis, the first Prime Minister of the Hellenic Republic in 1833, and sister of the multiply appointed Prime Minister Harilaos Tricoupis (1875-1894), Sophia Tricoupis was born in London in 1838 and died in Athens in 1916. In her early years in London, her family was often invited at court events, banquets, and dinner parties, and her name was included in the Queen’s guest lists printed in popular magazines and periodicals such as The Lady’s Newspaper & Pictorial Times which covered fashionable events in the 1850s. In the 1880s and 1890s she lived with her brother and organized his social calendar, entertaining important political and social figures from around the world. British and American publications of the time stress her striking personality, her ties with England, her devotion to her brother, but also the influence she had on him, as in the case of this article in The Saturday Review of Politics, Literature, Science and Art:

I have a vivid recollection of afternoon tea with Miss Tricoupis, balancing my cup with difficulty in the utter-most parts of a very deep armchair, dividing slices of bread and butter à l’anglaise with a kind of deerhound which rubbed its nose into my legs persistently all through my visit, and listening to the perpetual refrain “my brother.” “When my brother gets back to power,” I remember her saying, ‘‘the financiers will advance more money than he requires. My brother is the only man who can solve the financial problem, and he will solve it at once. It is no problem to him. Delyannis has brought the country to the verge of bankruptcy, but my brother will soon show himself, what our people call him, ‘the Saviour’ of Greece.” …

At last I ventured to ask if I might have a word with the great man. Miss Tricoupis implied that that was a great though very natural ambition, but said she would go and see if she could get me five minutes. I was left in the company of a huge photograph of Tricoupis, which confronted me on an easel, and presently she returned to the door and beckoned. As we went downstairs to his study, she remarked impressively, “My brother is always glad to see Englishmen, but of course you know he is never interviewed. He never consents to that.” Almost the first words which Tricoupis addressed to me were to the same effect, but were conveyed with unpleasant hauteur. I replied that I had no wish to interview anybody, but that I was glad to make his acquaintance. (Kordoni, 391)

In 1905, another commentator in The Fortnightly Review states that “Miss Tricoupis, in fact, deserves to be remembered as the one mistress of socio-political diplomacy who inherited the tact and success of an accomplished Englishwoman—Lady Palmerston” (Escott, p.317). Her salon which bore witness to visits from and debates among important political figures, is best described in a memoir of American diplomat, Eugene Schuyler, Consul General in Greece (1883-84), by his sister, Evelyn Schuyler Schaeffer:

Interesting [Harilaos Tricoupis] always was, but he did not care for trifling; nor could he find leisure or inclination to be so constantly accessible as is expected in ultra-democratic Greece. His devoted sister took that duty upon herself. Miss Tricoupis was never known to go out of the house, but received from eight o’clock in the morning until midnight. A man-servant in Greek costume sat on a chair on the pavement, in order to be able to direct visitors upstairs. At the head of the stairs they knocked on a door, were bidden to come in—”Oriste!”—and entered the salon. This was a room literally filled with plants and flowers. An india-rubber plant reached to the ceiling; all manner of other things grew in pots, and every available spot held plates and vases of flowers, principally wild flowers. Miss Tricoupis always sat on a sofa at the left of the door. Chairs were arranged in a semicircle in front of the sofa, and the most distinguished guest was placed beside the hostess, in the Continental fashion. Miss Tricoupis wore an unchanging costume; a black stuff gown made with a train, with white lace around the neck and down the front of the bodice, and her hair braided in front à la Grecque. Her face was not handsome, but strong and pleasing, with very bright, brown eyes. At this time she was a middle-aged woman, perhaps a trifle older than her brother. She had the vivacity which he lacked, and made herself agreeable to every one. Besides this, she was able, in the course of a day, to pick up any amount of information which he must have found useful. Foreigners were welcome to her salon during the day, but the evening, when Tricoupis himself could be present, was reserved for the Greeks. (pp. 158-159)

Even though Sophia Tricoupis’s accomplishments were always praised, women’s periodicals in Britain adopted a more critical view of her domestic role and seclusion. Two articles published in Atalanta (1896) and The Girl’s Own Paper (1897) compare modern Greek women to their British counterparts, suggesting the restricting effect that the role of hostess still had on women. For F. Bayford Harrison, “The free—almost too free—life of English girls is unknown to Hellenic maidens” who live in “semi-seclusion” as a result of a “strong tinge of Orientalism [that] lingers in everything Hellenic” (445). Sophia Tricoupis, despite her power, becomes this writer’s example of a woman who exemplifies backward tendencies and inequality:

One of the great influences of Athens is Miss Tricoupis, sister to the gentleman who has so often been Prime Minister; it is said that she is as much thought of by people as her celebrated brother. He is a bachelor, and she keeps his house. When he is in power his hall door stand always open, and everyone, rich and poor, may walk in and lay his grievances at the feet of Miss Tricoupis. She is an elderly lady, of small stature, very quietly dressed; her manner is extremely genial, and she speaks four or five languages perfectly. Her drawing-room is crowded with palm-trees, and with vases of cut flowers. Miss Tricoupis is always at home: she never goes out! One cannot ask her whether she has adopted this indoor life for reasons political, social, or personal; but the fact remains that, while every sojourner in Athens calls on this lady, she calls on no one. (Bayford Harrison p. 446)

In a certainly more positive view of Greek women and their customs, Isabella Fyvie Mayo, the Scottish writer and suffragette, on the one hand, also attributes Sophia’s seclusion to lingering Turkish influences, but on the other sees her hospitality as a sign of progress, in which, as she argues, “Greek women of to-day have their share” (p. 453):

…Turkish influences have touched Greek women so far that in the cities they do not care for active outdoor exercise quite so much as do their western sisters. It is said that Madame Sophia Tricoupis, the accomplished sister of the late prime minister of that name, scarcely ever leaves her house in Athens, though she welcomes guests from all parts of the world with the most gracious hospitality. (Mayo, p. 453)

Finally, Sophia Tricoupis deserves mention in a “Personalities” column in The Independent (1887), as a formidable and incomparable hostess and polyglot that may put to shame the most celebrated of London hostesses:

A very prominent woman in the high society of Athens is Miss Sophia Tricoupis sister of the Prime Minister. She is in advanced life; not robust; but indefatigable, brilliant and kind-hearted. She “receives” formally, from ten in the morning till midnight, almost daily (think of that, ye hostesses of our capital!), and can converse in about a dozen modern languages with perfect facility. (p. 9).