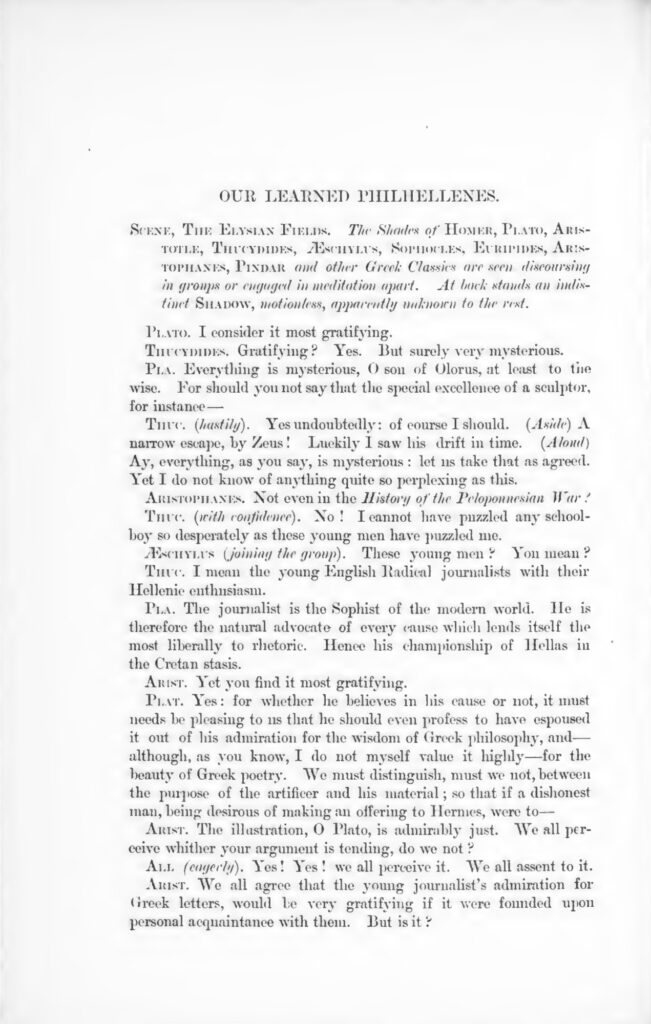 In Part one of the “Cretan Revolt” blog post, mention was made of a theatrical play by journalist and author Henry Duff Traill. The play entitled “Our Learned Philhellenes” was published in the Fortnightly Review (April 1897) and was related to the Cretan Revolt of 1896 which in April 1897 was still unfolding, full-force. The play, full of wit, irony, and humour, criticizes the “young English Radical journalists with their Hellenic enthusiasm” who champion the Cretan stasis solely, it seems, on the grounds of classical associations. In a reversal of the young fervent champions of the Ottomans in the British daily and periodical press, forty years earlier, the play seeks to portray this “Hellenic enthusiasm” of young Radical journalists as empty and superficial – a mere shell. It is a criticism that goes beyond the journalistic profession and targets the established trope of viewing, perceiving, and judging modern Greece through the filter of antiquity.

The scene opens at the Elysian Fields where the “shades” of the Greek philosophers, poets, and dramatists are engaged in vivid conversation. Mercury is daily bringing in the ghosts of the deceased along with the (British) newspapers and the “Greek Classics” are informed of the Cretan Revolt. The “Classics” mark the fervour with which certain young journalists and poets espouse the Cretan cause; it is a fervour borne – as they declare – out of their profound admiration of “the wisdom of Greek philosophy, and the beauty of Greek poetry” (504). The “Classics” confess being gratified, albeit mystified, at this declaration. Aristophanes, ever a sceptic, wonders whether “the young journalists’ admiration for Greek letters were founded upon personal acquaintance with them” (504). In order to answer the question, a delegation of the “Greek Classics” ascends to Fleet Street.

Traill spares neither poets nor journalists: reciting alone or in groups, they are represented as puffed-up public performers whose authority draws on a presumed privileged acquaintance with the marvels of the Greek letters. The authority of the poet and the journalist as a public orator whose particular view weighs in the shaping of public opinion is repeatedly ridiculed and, therefore, undermined.

Three poets appear on scene: each recites alone and then they all sing in concert. Poet number one begins:

I have not blushed for England till to-day;
But thou’lt repent, my country ere… (506)

He’s briefly interrupted by poets two and three, who express the same sentiments in slightly altered verse. He then addresses the European Powers and exclaims:

Avaunt, ye sacrilegious crews,
Who dare at Greece to shake a fist,
When I, a darling of the Muse,
Command you, ruffians, to resist. (507)

All three poets propose to defend the Greek side on the Cretan stasis on the basis of ancient Greek mythology and history, which they cite abundantly, although with a highly comical effect:

Must I these reckless States exhort
To spare the holy isle that bore
That curious semi-bovine “sport”
By Theseus slain, the Minotaur? (507)

Poet number three draws on the established gallery of images of ancient Greek heroism – Salamis, Marathon, Platæa, etc. – in a way satirically reminiscent of the Romantic poets who sang for the freedom of Greece during the Greek War of Independence. Traill has poet number three pose a question absurd in its logical drift, thus suggesting the irrelevance of ancient Greek history as an argument for resolving modern dilemmas:

For if Sparta, that resolute nation,
Stood fast in Thermopylæ’s gorge,
What’s that but a clear demonstration
That Crete should belong to King George? (508)

Finally, the three poets unite their voices and urge the European concert “for very shame / To yield to this united claim / of history and myth” (509).

The issue for March 1897 of the Nineteenth Century journal opened with a poem by Algernon Charles Swinburne entitled “For Greece and Crete.” There is no indication that Traill, a month later, is responding to this particular poem; nevertheless it is worth quoting the first two stanzas as there is a marked affinity between the feelings and ideas expressed by Swinburne and Traill’s fictional poets:

Storm and shame and fraud and darkness fill the nations
full with night
Hope and fear whose eyes yearn eastward have but fire and
sword in sight:
One alone, whose name is one with glory, sees and seeks
the light.

Hellas, mother of the spirit, sole supreme in war and peace,
Land of light, whose word remembered bids all fear and
sorrow cease,
Lives again, while freedom lightens eastward yet her sons of
Greece. (337)

Turning back to Traill’s play, the journalists enter the scene as a group which, in the spirit of ancient Greek drama, splits into three choric bands: the Platonics, the Aristotelians, and the Æschylo-Sophocleans. Each group sings a chorus that aims to demonstrate their knowledge, power and authority both as savants and as members of a powerful “tribe” – the journalistic. At the same time, each chorus rehearses the significance of classical Hellas as a beacon of culture.  Inadvertently, though, all groups expose their superficial knowledge of “Greek letters”. Here are the Platonics:

In the name of the newspaper tribe
Our conviction we wish to subscribe,
That from nowhere so well as
From classical Hellas
Can moderns their culture imbibe

As for us, we were suckled on Plato,
And yearned, in our cots as we lay, to
Expound that philosopher’s meaning.
Can any revere him as we do –
We, fed, and fed full on Phædo
And Gorgias, up to our weaning?
[…]

Then beware how the Greeks you coerce,
Lest our Platonist creed we rehearse,
As we can, we may say,
In a general way,
If we cannot give chapter and verse. (509-510)

Traill makes a special provision even for “Lady-Journalists.” One such appears on scene who sings “in a lamentable voice” a song which in its imagery, themes, and tone bears an eerie, albeit ridiculed, resemblance to the impassioned poems of the Romantic “poetesses” that were published in prominent literary magazines during the 1820s.

O Salamis fair! shall thy glorious plain
Recall to our sluggish hearts in vain
That grandest of earthly scenes,
When the hoplites of Hellas with spear and targe
Hurled back in disorder the furious charge
Of the Median horse-marines! (511)

The play concludes with the return of the “Greek classics” in the Elysian Fields. They tend to agree that the modern poets and journalists are familiar or rather “not ignorant” of the heroic drama, the philosophical dialogue and treatise, as well as of the epic (511). A mysterious “shade” enters the company and dispels their illusion: it is the ghost of the English classical scholar John Lemprière, “the coach in all the classic lore,” the author of perhaps the most popular handbook on mythology and classical history intended for scholars, journalists and poets.

Dream, then, no more that you inspire
Our ardent Philhellenic band,
Know that these souls of air and fire
Were only reached – at second-hand.
My friends, it is not you they read,
But me, or my descended breed. (512)

At the very beginning of the play, Traill’s Plato argues that “the journalist is the Sophist of the modern world. He is therefore the natural advocate of every cause which lends itself the most liberally to rhetoric. Hence his championship of Hellas in the Cretan stasis” (504). Are poets and journalists Sophists who toy with a hackneyed concept, “Greece/Hellas”?

Henry Traill was aware of the flaws and strengths of the newspaper jargon and he explores them in his essay “Newspapers and English”. Structured as a dialogue between two fictional persons, Minutius and the journalist Scriptorius, the text begins with Minutius’s assertion that what is being written in the newspapers is “not [the journalists’] own writing, in the sense of being [their] own thoughts expressed in [their] own language. It is the thoughts of [their] political party expressed in the language of [their] guild” (170). Although this particular language resembles English it is rather a construction, stereotyped and devoid of original style. Moreover, due to the medium’s vast circulation it threatens to corrupt the “proper” English language. “Bravo, Minutius!” exclaims Scriptorius, “the coiner, it seems, is guilty of nothing worse than a preference for coins which have seen most service” (194). In the case of “Our Learned Philhellenes” one may possibly wonder whether “Hellas” and the images and connotations it bears are, for its impassioned defenders, just another such coin “which has seen most service”.

Leave a Reply Cancel Reply
You might also like
One of the following
The Cretan Revolt (1896-1898), Part 1
Sophia Tricoupis, hostess and “mistress of socio-political diplomacy”