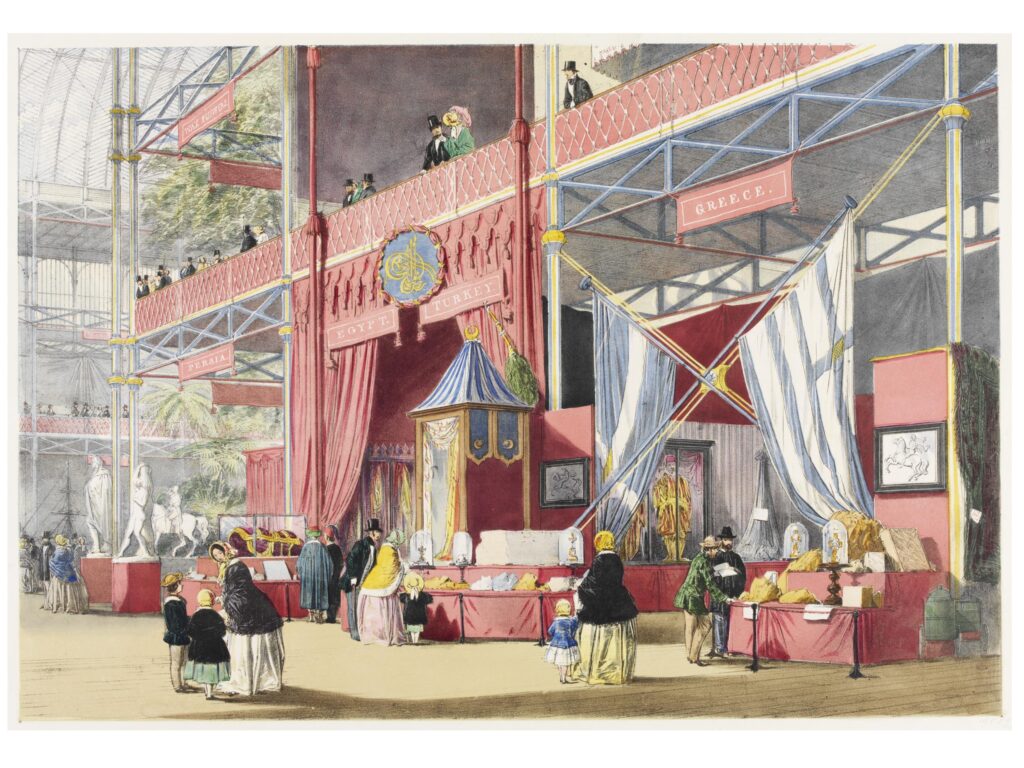 The Great Exhibition of 1851 in The (London Evening) Standard

The lengthy and detailed passage begins by alluding to the excellence and civilization of ancient Greece and goes on to make specific reference to the intricacy and richness of the Greek costume displayed in the Greek pavilion. The author comments on the fact that despite the textiles and other items of clothing exhibited, Greece lacks in manufacture as a whole. Natural produce such as plants used for pigments, currants, figs, tobacco, honey, and sponges are apparently displayed in  abundance. The passage comes to a close by enumerating the different kinds and origins of marble, which serves as a convenient link to the more prestigious field of works of art and a reference to the Parthenon:

“A bay, surrounded on the north-east and west by Turkey, is all that is occupied by Greece, a region once so famous when the rest of the world was immersed in ignorance and barbarism. The principal thing that strikes the spectator when he enters the recess is a figure the size of life standing in a glass case on the left, exhibiting the full Greek dress namely, the scarlet jacket, embroidered with gold, and all those light and gaudy appurtenances of shirt, gaiter, and slipper with which the stage and bal masques have made us so familiar. But here we have the costume under authority, and nothing can be more striking. The sides of the case are hung with the various articles of attire, so that each may be studied separately. On the opposite side of the chamber there is a correspondent case, filled with ladies’ scarfs wrought at Cumi, and elsewhere there are some silk sashes, mosquito curtains, and handkerchiefs, but Greece is anything but famous for its manufactures, the lower orders producing, with but few exceptions, the articles required for their domestic consumption. The specimens that we have mentioned constitute nearly the whole that the Exhibition contains declaratory of the national ability in works of a textile character. Their showiness is, however, pleasing to the eye. The embroidery that we see upon the Greek jackets is a species of labour in which the women excel, and the examples that are shown in the case to which we have alluded are as beautiful as they are elaborate. The art of dyeing, so celebrated in the history of the ancient Greeks, may also be considered as demonstrated in the crimson skull-caps and leggings, the blue and scarlet colours of which are pure and brilliant in the extreme. It is said that the Isle of Andros produces some good carpets, and the Isle of Siphnos sail-cloth and straw hats, but contributions from either of these places are wholly absent. The dried cups of the Quereus Aegilops, used for tanning, are among the most interesting specimens of the natural produce, as well as the madder-root and the kermes, both of which are used for dyeing purposes, the latter being extensively employed in the Fezzes worn by the Turks. The currants of Patras, the figs (strung like beads) of Messenia, and the tobaccos of Lamia, Livadia, and Argolis, are on view in small quantities; and the “honied wealth” of Hymettus, both in the comb and otherwise, is not wanting. The Greek Government exhibits a box of very fine meerschaum from Thebes; and there are likewise some sponges to uphold the renown of the Gulf of Nauplia. The marbles in which Greece is so rich are well represented, and the entrance to the bay is crowded with specimens from Sciros, Sparta, Scutari, and other places, including Paros, some of the blocks from which island are of remarkable clearness and beauty. The Cipolino marble, the same as that used for the columns of Antoninus and Faustini in Rome, is exhibited in a single piece, just as it is brought out of the quarry of Carysto, in company with the coloured marbles of Crokea, the variegated marbles of Perori, and the black marbles of Tripolitza. The entrance is likewise garnished with some Athenian bas-reliefs representing portions of the frieze of the Parthenon, finely executed in Pentelicon and Parian marble; and there are also, we may add, some scriptural carvings, in the old Byzantine style, in sandalwood, curiously and laboriously minute, which will repay examination.”

Featured Image: The 1854 print by Joseph Nash shows the Greek pavilion at the Great Exhibition, with a national costume on display in a glass case. The technique is lithograph on paper with watercolour and the print was published in London, 1854.

Leave a Reply Cancel Reply
You might also like
One of the following
The Great Exhibition of 1851: An Illustrated Tour of the Crystal Palace
Voyage from Leghorn to Cephalonia with Lord Byron, and A Narrative of a Visit, in 1823, to the Seat of War in Greece.
Greece as a Block of Marble in The Great Exhibition, 1851

Greece as a Block of Marble in The Great Exhibition, 1851