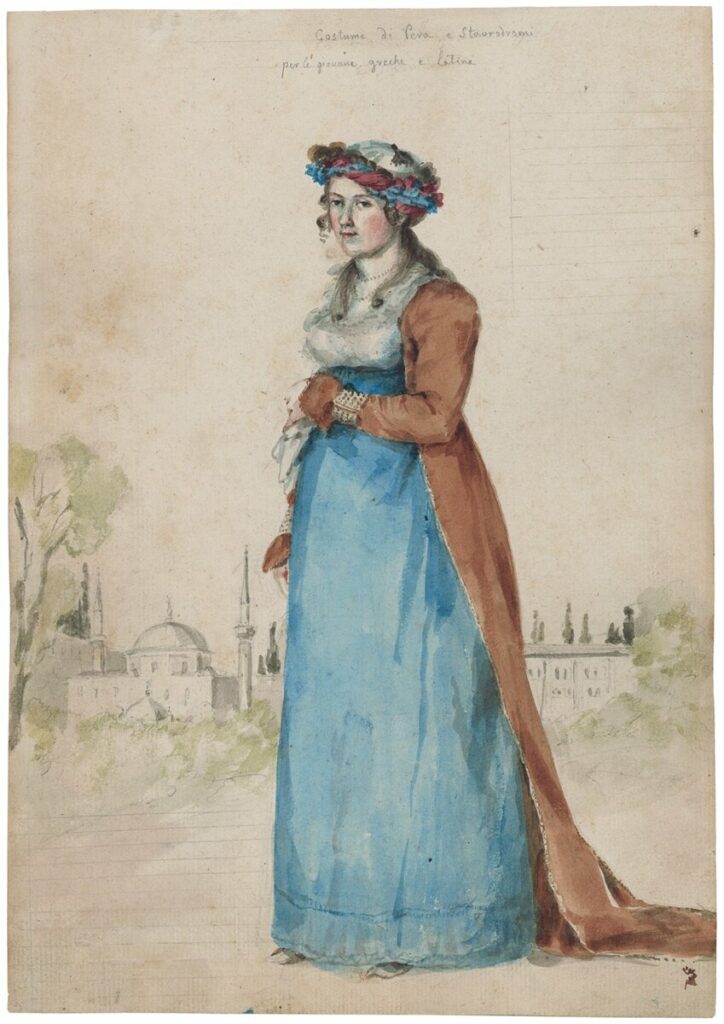 Part I: “The Pearl of the Bosphorus – a Tale of the Phanar”

In 1847, two Greek-themed short stories were published anonymously in the Dublin University Magazine. The first is entitled “The Pearl of Bosphorus – a Tale of the Phanar” and it appeared in two parts, in the issues for January and February.

The central theme of the story is filial love expressed as profound, unwavering devotion of child towards parent even in the face of personal danger and death. Two parental figures loom over the lives of the heroes and seal their destiny: one is the figure of the father, Constantine C., whose horrific end drags his only daughter Erotà – the ‘Pearl of the Bosphorus’ – to her grave. The other is Greece in the symbolic form of the Motherland, which exacts the life of her children for her regeneration.

Late one summer evening an envoy of the Heteria, a secret society that was instrumental in the orchestration of the Greek Revolution, appears at the house of Constantine C. It is the Greek monk Neophytus, who comes to claim Constantine’s sacred moral debt: the prince has taken the terrible oath of the Heteria and must die defending its cause. In fact, all male characters of the family are drafted to the Greek revolutionary cause that very evening. Constantine is ordered to remain in the city and provide his hidden gold to the Heteria, a mission that guarantees death by torture. Anthymos and Riga Galati, that is, Constantine’s son and the husband-to-be of Erotà, respectively, must join the insurgents in the battlefield. At the call of the Motherland, all of her sons must obey. 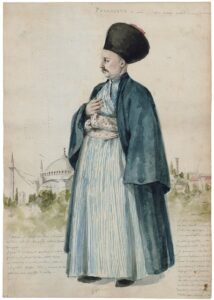 The anonymous author views sympathetically the Phanariotes and depicts them in the noblest colours. Their moral character is impeccable: the author highlights their fiery devotion to Greece, their genuine resolution to join the armed struggle, the generosity with which they offer to sacrifice their own life. It is by no accident that the principal character, prince Constantine C., bears the name of the last Byzantine emperor who met a heroic albeit tragic death during the Fall of Constantinople (May 1453). It is in the same tragic and heroic way that the prince of this story will meet his own death. Furthermore, the choice of the author to name Riga Galati after Rigas Ferraios, an inspiring figure and martyr of the Greek Revolution, further strengthens Galati’s moral character. Their physical aspect and bearing are noble as well, in stark contrast to their lethal enemies, the Ottomans pashas and Veli the Armenian, who seem to be moved solely by the base motive of avarice. If the Greeks are noble creatures, their opponents are deformed in body and soul.

Yet, the author of the story remains skeptical of the very idea of Revolution and, one may argue, of the concept of patriotism. We read:

For it is the summer of the year 1821, and that year lives to this day in the memory of thousands! – not so much because the whole nation of regenerated Greeks may cry, exultingly, ‘Then we became free!’ as because every here and there an aged father may still murmur out, ‘Then I became childless!’ or a widow and an orphan tell how, in that year, their country stole from them a husband and a parent! (1-2).

And further on, when Constantine C. confronts Omer Bey, who has come to arrest and torture him:

But patriotism is at best but one of those virtues which have no reference to the immortality of man, or connexion with the world to come, and, like all such baseless and unsanctified aspirings, presents such shadowy phantoms to the soul, as must at last allure it on to crime (202).

At various points in the story, the author commends spiritual fortitude and the promise of “the world to come” (202) instead of heated action and violence, and projects the ideal of national independence as ephemeral or of this finite world. Perhaps this tale should be read within the context of the social unrest that prevailed in Ireland in the years of the Great Famine but also in conjunction with the revolutionary wave that swept across Europe during the late 1840s. In “The Pearl of the Bosphorus”, the effects of idealism pave the way to individual destruction: the Pearl loses brother, husband, father, and then hope, sanity, and life.

In the tale, Erotà the “Pearl” has a complex function. She’s her father’s Paradise at home, an earthly angel. Yet her father must disown his paternal connection towards her in order to observe his duty to Greece, his Motherland. When Omer Bey challenges Constantine to give up his gold or never see his daughter again, the Greek chooses his country over his child and passionately commands her:

‘Erotà, my daughter leave me,’ he exclaimed, trying, with all his strength, to unclasp the clinging hands of his child – ‘leave me, I entreat – command you! let me go! to look into your face is death to me; it unnerves, unmans me! would you drive me to commit the deed which I abhor? – let me go! (202)

In the story, Erotà may serve as a reminder of the terrible effects of idealism on a personal level. At the same time, her dogged devotion to her father against hope and logic, even after his demise, positions her on an elevated spiritual plain and projects filial devotion – that of child to parent and not to some abstract idea – as the ideal to be pursued and honoured.

At last when the hasty interment was completed, and they had replaced the broken turf, so as to efface all vestige of their midnight labours, Erotà suddenly lifted up her arms with one long shriek, such as they had never before heard from mortal lips, and exclaimed – ‘Telos’ (at last) and instantly sunk down motionless on the ground. […] For the Pearl of Bosphorus had broken her heart over the grave of her father. (212)

More on this motif in Part II: “Erotion, a Tale of Ancient Greece”

Leave a Reply Cancel Reply
You might also like
One of the following
The Greek Maiden and Filial Love in the Dublin University Magazine (1847), Part II
Mary Louisa Whately’s “Greek Slave” in Egypt
Lucy Mary Jane Garnett and Greek Women – Part I

The Greek Maiden and Filial Love in the Dublin University Magazine (1847), Part II