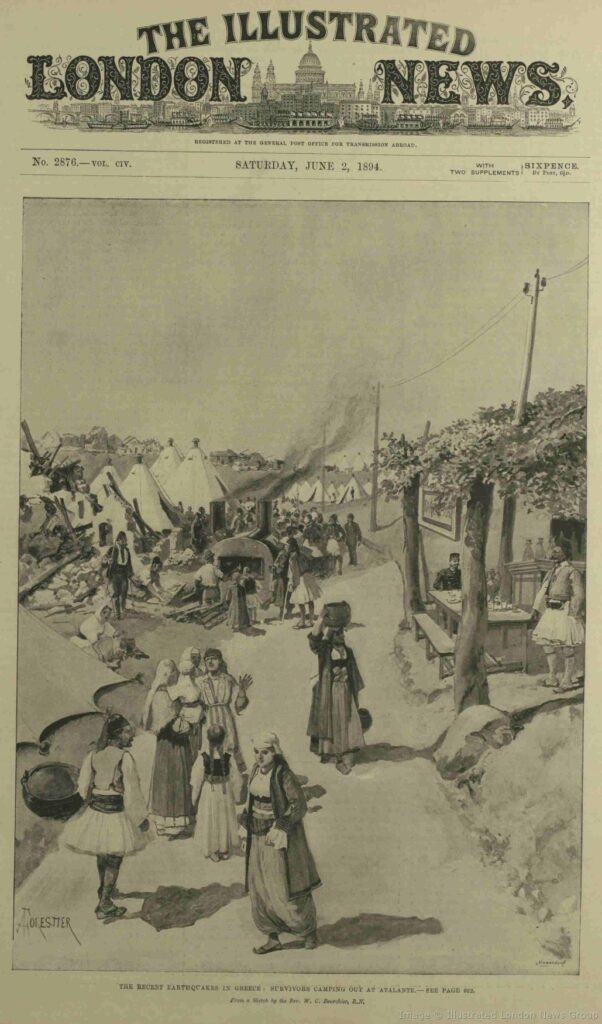 “The Recent Earthquakes in Greece: Survivors Camping out at Atalante” (ILN, 2 June 1894)

Originally published in 1842, The Illustrated London News (ILN) was the first newspaper to allow the image to get integrated in the news. As a dissemination of news from outside Britain was slow and special correspondents were sent to only particular events around the globe, the majority of images corresponding to Greek events until 1900 in this popular illustrated newspaper are of landscapes or monuments. A depiction of people is scarce except as props framing an image or as portraiture. William Simpson’s drawings of Greece for the ILN are a case in point. In his depictions of classic sites of ancient Greece, we find a cover illustration for the February 3, 1877 issue on the ruins and excavations of Mycenae from sketches taken on the spot. The image shows the entrance to Mycenae and depicts the artist himself at work surrounded by three natives, two adults and a child, all in traditional dress, showing an active interest in the artist’s work. Their presence is a necessary detail adding a touch of the folklore to the image, elegantly framing the scene depicted as one truly happening in modern day Greece. Other drawings include shepherds standing in front of the treasury of Atreus or other hazy figures simply existing in the landscape as in a painting in which figures are used to balance the composition, tell a supposed story or, simply, give a reference for scale. It was not usual for figures to be the focal point of the newspaper’s illustrations.

Illustrations filled with people are outside the norm and tell a story by themselves. These range from human interest stories to description of war scenes with the first special artists sent to report back with visual reportage. Starting with 1843 and the pictorial depiction of the success of the uprising for the granting of a constitution in Greece, figure-centred images reappear in the trial of the Greek brigands in 1870 and then again in 1878 and 1894, during the insurrection in Crete and a disastrous earthquake in Atalante. A couple of years later we find an illustration of people attending the Olympic Games in Athens in 1896 while in 1897 there are a series of images about the Greco-Turkish war. It was then that special artists were sent by the newspaper to follow the Greek and Turkish forces and so it was also then that we find the first set of photographs concerning Greece. The final set of photos picturing people until 1900 is in 1898 with views of Candia (Heraklion) during a new set of conflicts in Crete – eventually also covering the departure of the Turkish troops from the island – but also of a demonstration in Athens after the failed attempt on the life of the King of Greece. Human figures envelope the setting depicted and create a specific message different to what a mere depiction of a place can communicate. In addition, when the people are placed on the frontstage, the land is supposedly becoming real and inhabited and the image is therefore more powerful. The royal palace in Athens, the courthouse, the stadium and the coffee house stage different aspects of life in Greece placing the images in the present moment.

Our feature image appears on the cover of the June 2, 1894 issue of the ILN. It depicts survivors of the recent earthquakes in Greece camping out at Atalante. The image is from a Sketch by the Rev. W. G. Bourchier, naval chaplain to H.M.S. Hood, of the Mediterranean Squadron. The illustration is paired with a text on p. 692 of the same issue which contains an article on ‘The earthquakes in Greece” together with two additional images showing fissures in the ground in Atalante and a view of the town in ruins also by Bourchier. His illustrations, the article informs us, “show the scenes of havoc in that neighbourhood as they appeared on May 12”. The earthquake had occurred on April 20th. The cover page image is an example of an illustration promoting a human interest story even though the corresponding text does not focus on the loss of human life but on the destruction of the land narrating the ancient history of the area around Atalante and noting how the shocks were also felt in Athens “on some part of the remains of the Parthenon and the Arch of Hadrian, from which a few stones fell”:

The disastrous effects of the series of earthquakes that began in the third week of April in Eastern Greece have excited much compassion. The loss of lives has scarcely exceeded three hundred, but several towns have been wholly or partially ruined and made uninhabitable, and many, villages and hamlets entirely destroyed. The districts addicted by this visitation are those comprised within the ancient Phocis and Boeotia, on the shore of the channel which separates the large island of Euboea, or Negroponte, from the continental parts of Greece to the north of Attica. In the ages of classical antiquity, Thebes, the chief city of Boeotia, was one of the most renowned scenes of mythical legendary romance, and subsequently of important historical transactions. The modern town was a comparatively insignificant place of three thousand inhabitants; but the neighbouring country, a low, damp plain fertile soil, supported numerous pastoral folk, and projects of draining the Lake Copais and the Livadian marshes have promised much benefit in the way of extending agriculture. On the shore of the gulf some thirty miles north of Thebes was the lately thriving town of Atalante, in Phocis, which has, with the villages around it, suffered more than any other place from the earthquake, north-east of Athens. It is sixty or seventy miles north-east of Athens.

Violent shocks were felt throughout Euboea and the neighbouring islands, Skiathos, Skopelos, and Skyros. The shocks were less severe in the Peloponnesus, while Zante and the other lonian Islands appear to have escaped without injury. In the city of Athens the shocks were felt, and took effect on some part of the remains of the Parthenon and the Arch of Hadrian, from which a few stones fell.

In covering events in Greece, the significance of the land could not be escaped. Even the final lines of the text, which only mention that the Greek Government was taking measures for the relief of the sufferers, end with the sympathy shown to them by the royal family in a sentence which places emphasis on the “charitable purpose” of the royal family’s visit: “The King and the royal family showed the keenest sympathy with the victims, and have been superintending the measures of relief, for which charitable purpose they went from Athens to Atalante in the royal yacht.” However, the balance is restored with a second piece a week later by writer E.F. Benson who describes both the destruction of property and how the people were affected by the earthquake. Benson was working in Athens for the British School of Archaeology at the time.

‘The earthquakes at Atalante’ appeared in the June 9th issue of the ILN. The fact that the newspaper dedicated a second text of substantial length on the same story (spreading over three quarters of the page) makes us think that this was a noteworthy news item of the day. Benson travelled with a Greek coasting steamer running up the eastern side of the country and described the extent of the destruction as he witnessed it. Human stories are described alongside the destruction of property and a specific mention is made to the fact that two severe shocks were felt at Eastertime, one of them on Good Friday. Benson also takes the time to describe nature in full bloom in a May scenery in Greece:

It was the sort of scene which one has looked upon often in Greece, but which never grows less satisfyingly wonderful. The intense colour, the extravagant luxuriance of the place, the land breeze which was already beginning to stir and come down laden with scent and freshness, made up that spell which May weaves silently and lovingly over Greece when, year by year, “blossom by blossom the spring begins.”

This was no ordinary reportage. The advantage of having a fiction writer report back from Greece was that the readers could learn more on the events in a piece whose narration retained fictional elements and so resembled a mode of narrative on Greece the public was familiar with. The details given to the descriptions – dogs still lying on the thresholds of destroyed houses, an old man trying to piece together some fragments of a large earthenware jar, shocks occurring during the “sombre realistic piece of ritual” on Good Friday, dialogue as part of the story told – brought the narrative to life and made Modern Greece a familiar place for the imagination:

As we went up to the church we heard a woman’s voice raised in shrill lamentation, after the manner of Greek Women. “They are burying her husband,” my guide told me. ‘‘He died this morning of the effects of the earthquake.” “Did she lose any children?” Yes, all her children; there were four of them.” And through all the village there was the same tale. One man had just left the house to get water, leaving in it his wife and three children. They had been buried two days before. And in no single instance did they ask me for help, but everyone I saw had one question: “Will there be another earthquake?” I have never before felt so sickeningly helpless.

We breakfasted under a tree by the village spring, and the people came down from their tents and told us of the horrors of the night just after the earthquake—how men ran like frightened animals out into the country, not knowing where they should be safe. Some even made their way across the hilly country to the next village to seek for help and provisions, and when they came there they found it was destroyed too, as utterly as their own. Then, when day dawned, they saw the absolute desolation, of their homes; they carried their dead out to burial in the churchyard on the hill, and began life again alone.

Leave a Reply Cancel Reply
You might also like
One of the following
Meteora: “The Monasteries in the Air” in the Victorian periodical press, 1880 and 1888
Byron’s The Isles of Greece Revisited in 1897
J. Gennadius on Spyridon Loues and the 1896 Olympic Games in The Illustrated London News

REVICTO at Divergent Temporalities: Capitalism and the Conquest of Space-Time (Athens, Panteion, May 2022)

REVICTO introduces itself at the University of Athens Hub!