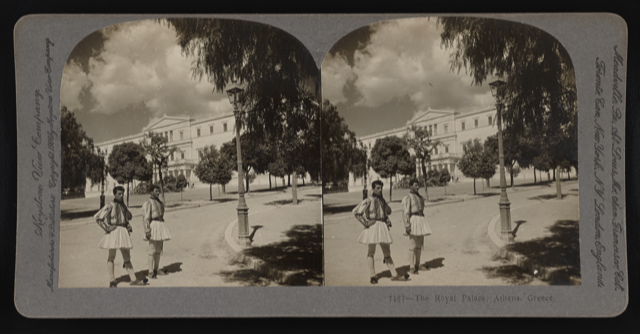 William Makepeace Thackeray and the Palace in Athens

The fifth chapter of William Thackeray’s travelogue Notes of a Journey from Cornhill to Grand Cairo by Way of Lisbon, Athens, Constantinople, and Jerusalem (1846) offers an account of modern Athens that is decidedly disassociated from its ancient past. Thackeray’s narrattor, Michael Angelo Titmarsh, distances himself from the dominant trope of idealising the Hellenic and sarcastically criticises the current situation of Athens, adding, in Lindsey Chappell’s words, “a skeptical voice to a market already teeming with Mediterranean travel accounts” (“The Satirist Abroad” 583):

I swear solemnly that I would rather have two hundred a year in Fleet Street, than be King of the Greeks, with Basileus written before my name round their beggarly coin; with the bother of perpetual revolutions in my huge plaster-of-Paris palace, with no amusement but a drive in the afternoon over a wretched arid country, where roads are not made, with ambassadors (the deuce knows why, for what good can the English, or the French, or the Russian party get out of such a bankrupt alliance as this?) perpetually pulling and tugging at me, away from honest Germany, where there is beer and aesthetic conversation, and operas at a small cost. The shabbiness of this place actually beats Ireland, and that is a strong word. The palace of the Basileus is an enormous edifice of plaster, in a square containing six houses, three donkeys, no roads, no fountains (except in the picture of the inn); backwards it seems to look straight to the mountain—on one side is a beggarly garden—the King goes out to drive (revolutions permitting) at five—some four-and-twenty blackguards saunter up to the huge sandhill of a terrace, as His Majesty passes by in a gilt barouche and an absurd fancy dress; the gilt barouche goes plunging down the sandhills; the two dozen soldiers, who have been presenting arms, slouch off to their quarters; the vast barrack of a palace remains entirely white, ghastly, and lonely; and, save the braying of a donkey now and then (which long-eared minstrels are more active and sonorous in Athens than in any place I know), all is entirely silent round Basileus’s palace. How could people who knew Leopold fancy he would be so “jolly green” as to take such a berth? It was only a gobemouche of a Bavarian that could ever have been induced to accept it.

I beseech you to believe that it was not the bill and the bugs at the inn which induced the writer hereof to speak so slightingly of the residence of Basileus. These evils are now cured and forgotten. This is written off the leaden flats and mounds which they call the Troad. It is stern justice alone which pronounces this excruciating sentence. It was a farce to make this place into a kingly capital; and I make no manner of doubt that King Otho, the very day he can get away unperceived, and get together the passage-money, will be off for dear old Deutschland, Fatherland, Beerland! (Notes of a Journey 72-73)

Titmarsh initially seems to sympathise with the fate of King Otho whose name decorates the Greek “beggarly coin” and who resides in a “huge plaster-of-Paris palace” with “no amusement but a drive in the afternoon over a wretched arid country, where roads are not made”. Perhaps Titmarsh, as a western visitor, would expect a certain modernisation of the capital of Greece that is nowhere to be found. To him, a modern state should be characterised by its strong currency while the palace of the monarch would be emblematic and imposing. Yet his critique of the “Old Palace”, today’s Hellenic Parliament, seems exaggerated even by his own standards; in fact, the design and completion of the building was supervised by the director of the Munich Academy of Arts and official architect of the Bavarian court, Friedrich von Gaertner who designed “an austere, functional and compact building which respects the heritage of ancient Athens, in keeping with the ideas of urban classicism” (www.hellenicparliament.gr). Therefore, the image of the building on September 9th and 10th, 1844 when Thackeray most probably observed it, would have born a strong resemblance to continental courts or administrative edifices and mansions of London, for that matter. Nonetheless, within the general context of his disappointment with the “impure modernity” of nineteenth century Greece (Kolokotroni and Mitsi, Women Writing Greece 13), Titmarsh—who is, otherwise, keen on seeing the country’s movement towards modernisation—disdainfully dismisses even the few signs of urbanisation seen in the city of Athens.

The imagery of penury and deprivation is equally sustained in his line of thought about the country’s political affairs. Titmarsh finds the intervention of Britain, France, and Russia in Greek politics incomprehensible, not for reasons of national sovereignty of the country, but because there is nothing to gain “from such a bankrupt alliance” (Notes of a Journey 72). In this context, Titmarsh emerges as the Briton who is very aware of his country’s involvement in the Greek affairs. To his western eyes and mind, making Athens “into a kingly capital” seems to be a “farce” and undoubtedly,“King Otho, the very day he can get away unperceived, and get together the passage-money, will be off for dear old Deutschland, Fatherland, Beerland!”. This last part of the text unsettles any sympathy the narrator may have ostensibly professed to have for the Royal head of the Greek nation emphasising the lowly motives of Otho.

Titmarsh, M.A (William Makepeace Thackeray). Notes of a Journey from Cornhill to Grand Cairo by Way of Lisbon, Athens, Constantinople, and Jerusalem. Performed in the Steamers of the Peninsular and Oriental Company. London: Chapman and Hall, 1846.